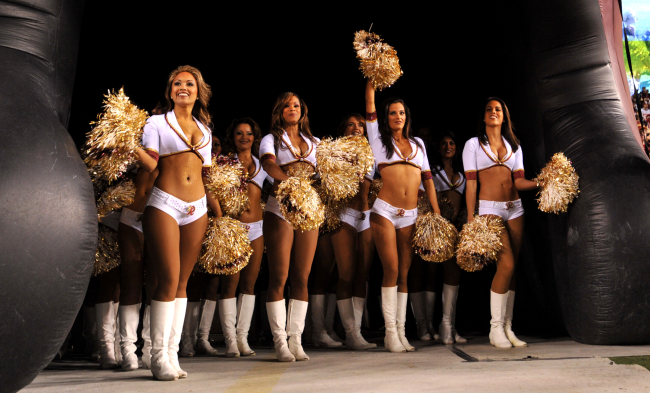 In 2020, it was reported that the Washington Football Team allegedly secretly produced explicit video of cheerleaders for owner Daniel Snyder, leading more than 30 former cheerleaders to express interest in filing a lawsuit against the franchise.

Reports about the potential lawsuit even indicated that Snyder even made a lewd request about the type of women he wanted on cheerleading squad.

In April of 2021, several incriminating emails surfaced in the NFL’s “independent” Washington Football Team cheerleader investigation. The emails reportedly revealed “a toxic work environment and contain troubling exchanges, including nude photos and other inappropriate correspondence,” according to Front Office Sports.

At that time, it was reported that the results of this “independent” investigation was expected to be delivered to NFL commissioner Roger Goodell within a few weeks.

So, what ever became of that “independent” investigation? And what is the NFL going to do now that even more incriminating evidence is being surfaced regarding the Washington Football Team cheerleaders?

As of right now, the answer is: pretty much nothing. The team did reportedly have to pay a $10 million fine (key word: reportedly), but that’s it.

That’s not good enough for several of the former WFT cheerleaders, nor Lisa Banks, one of the attorneys who represents nearly 40 former Washington Football Team employees.

“It is truly outrageous that after the NFL’s 10-month long investigation involving hundreds of witnesses and 650,000 documents related to the longtime culture of harassment and abuse at the Washington Football Team, the only person to be held accountable and lose their job is the coach of the Las Vegas Raiders,” Banks said in a statement.

“If the NFL felt it appropriate to release these offensive emails from Jon Gruden, which it obtained during its investigation into the Washington Football Team, it must also release the findings related to the actual target of that investigation. Our clients and the public at large deserve transparency and accountability. If not, the NFL and Roger Goodell must explain why they appear intent on protecting the Washington Football Team and owner Dan Snyder at all costs.”

Team owner Daniel Snyder was reportedly fined in 2020 by the NFL over the sexual harassment allegations that were leveled against him and his organization.

Snyder also reportedly paid a $1.6 settlement over accusations of sexual misconduct in 2020.

However, a large portion of the people most affected by Snyder and the Washington Football Team’s misconduct, the women, are still being left in the dark by the NFL.

Melanie Coburn, a former Washington cheerleaders and Redskins marketing director for the cheerleaders, tweeted this week, “It’s appalling that these are the only emails they selected to share (bc you know @NFL chose them). Where’s the report @nflcommish?! Now that we know cheerleaders photos were being shared, can we dig into that more please? They deserve to know the truth. We all do.”

Former Los Angeles Rams cheerleader and one-time Monday Night Football sideline reporter Lisa Guerrero tweeted, “For years I have been writing, tweeting and speaking out about the NFL’s toxic, misogynistic culture around cheerleaders. It’s been like screaming into the wind. At least now more proof is coming out about it… Unfortunately, decades too late.”

Attorney Banks told USA Today this week that she emailed Lisa Friel, the NFL’s special counsel for investigations, at the end of September, and again earlier this week about the investigation.

On Wednesday, she finally received a response… sort of.

“She sent me an email saying, ‘Sorry, I’ll be in touch,'” Banks said. “But without any substance or timing.”

Curiously, there is no written report of the independent investigator’s findings in the matter, just a series of oral reports given to the NFL back in July.