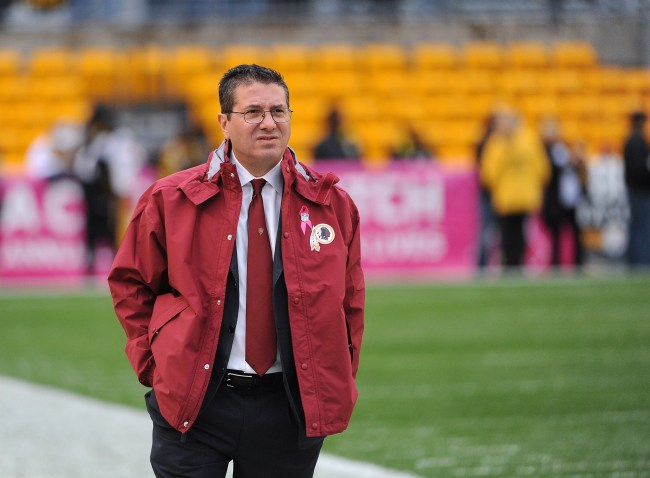 Following the bombshell report of 15 women accusing high-ranking employees of the Washington Redskins of sexual harassment stemming back at least a decade, the franchise and team owner Daniel Snyder are bound for some repercussions. While nobody knows exactly what type of punishment and discipline the team will receive, a new Washington Post report at least offers some suggestions.

According to the most recent article, the Washington NFL franchise (since the Redskins have decided to change their name), could see some fines from the league, but it’s not believed to be much more than that.

“The NFL will seriously consider fining Washington’s team following accusations from 15 women of sexual harassment and verbal abuse against former club officials, and it will consider disciplinary measures against the individuals involved,” Mark Maske reports. “…The NFL is empowered to discipline a team, its owner or employees under its personal conduct policy. That person and another familiar with the NFL’s inner workings said a fine of the team is expected if the allegations are substantiated.”

Many have called for the NFL to force Daniel Snyder to sell the Washington Redskins, especially since this is the second time in just two years that allegations like this have been made against the franchise; with a 2018 incident related to members of the cheerleading squad.

Although Snyder wasn’t mentioned specifically in the initial report — and the team did either fire or force out those accused of sexual harassment like director and assistant directors of pro personnel Alex Santos and Richard Mann II, president of business operations Dennis Green, COO Mitch Gershman, and senior vice president of content and radio play-by-play announcer Larry Michael — it’s the owner whose hands are dirty here; and with good reason. He’s the person responsible for overseeing the entire organization, so he should be held accountable.

The team has hired an outside law firm to do a thorough and unbiased investigation, and Snyder issued a half-assed apology related to the harassment claims, but, per the recent Washington Post report, a fine from the NFL is the most likely punishment for both the owner and the team. The league said it will “meet with the attorneys upon the conclusion of their investigation and take any action based on the findings, per USA Today Sports.

An NFL statement on the Washington Post story alleging sexual harassment and other misconduct by former staffers is below. It begins: “These matters as reported are serious, disturbing and contrary to the NFL’s values.“

Given the accusations against Redskins employees, Snyder and the team should be more than just fined here. It’s one thing to slap them on the wrist and hope they self-discipline themselves, but it’s another thing for the NFL to take control and do the right thing by forcing him out — especially since this seems to be a repeated issue. Unfortunately, it doesn’t sound like the league will do that.