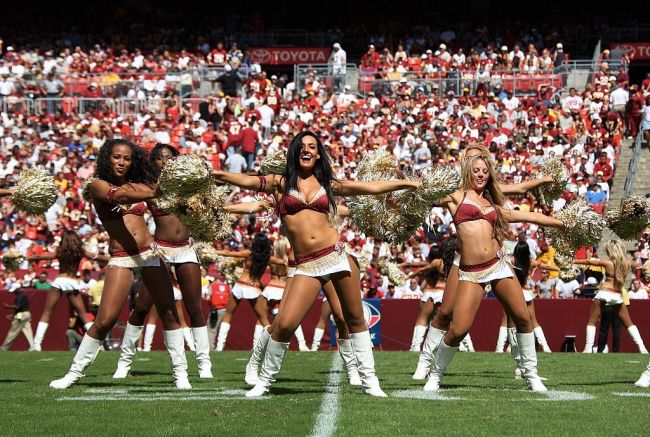 Three months ago, the Washington Football Team came under fire for a slew of sexual harassment and verbal abuse allegations were made against several team officials.

Yesterday, the Washington Post published a new report claiming over 32 former Washington cheerleaders are considering filing a lawsuit against the organization over the secret videos and possibly topless images.

Later in the day, the Washington Post put out another story about Washington’s former cheerleading director claiming Dan Snyder “once threatened to kill” him if he didn’t have skinny cheerleaders with big breasts.

“Like the cheerleaders he led, Donald Wells, who served as director from 1997 to 2009, is taking a hard look back at his experience with the team. He regrets that he could not have done more to protect the women. He also recalled a remark by Snyder that Wells said reveals his disrespect for the cheerleaders, their hard work and the value they brought to the team.

“You better keep them skinny with big t-ts or I’ll f—— kill you,” Wells said Snyder told him at a 2004 charity event where the squad performed.

Snyder, who has been the team’s majority owner since 1999, declined an interview request for this story and did not respond to questions sent to his attorney and public relations firm about the comment Wells said he made.”

The video described in The Post’s story was from a 2008 cheerleader swimsuit shoot. Allegedly, the outtakes would be used to show what was described as the women’s “good bits.” A few of the women in the video were 18 and 19 at the time of the shoot.

“Now in their 30s and 40s, with careers and children, the dozens of ex-cheerleaders who appear in the videos are terrified the footage will appear online and are coping with a painful reckoning about their seasons with the NFL franchise.”

Attorney Sharon Vinick, who previously sued and won wage-theft lawsuits against the New York Jets and Oakland Raiders, believes that “while the relevant state’s statute of limitations has probably expired, she still thinks the former cheerleaders have a case.”