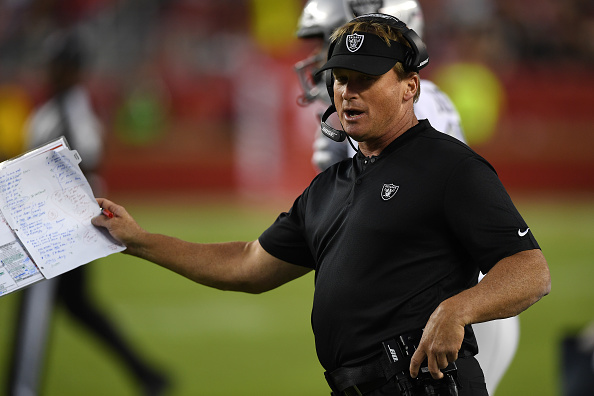 The Oakland Raiders are absolutely dreadful and it seems like the team had quit on head coach Jon Gruden.

Through three quarters, Niners third string QB Nick Mullens, has three touchdowns and has thrown for over 240 yards in his first career start against the Raiders.

It was pretty obvious that the Raiders gave up on the game when the defense allowed Raheem Mostert to get an easy 52 rushing touchdown.

Nine weeks into his return to coaching, Jon Gruden’s team has quit on him. There’s really no other way to assess it.

I’ve been on bad teams. Well really, one bad team in 2010. We averaged 12 pts a game! 12!… but we never gave up like this. Effort can always be given. This team has quit on Gruden.

In my eyes, Jon Gruden has committed a firable offense this evening by letting Nick Mullens (who I’m happy for) ball out like this

Jon Gruden has a quarterback with a $125 million contract. And he’s about to lose to Kyle Shanahan and a QB making $395K.

Jon Gruden trying to get out of the 49ers stadium after the Raiders game. pic.twitter.com/liOD7bN6CA

The Raiders have completely quit on Jon Gruden. This is absolutely pathetic.