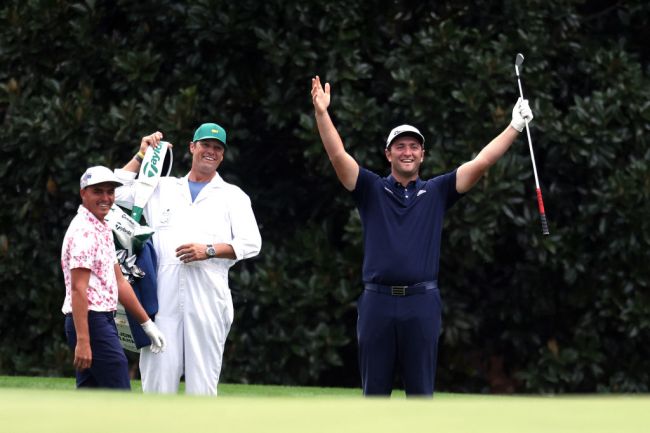 One of the many great traditions at the Masters is players attempting to skip their tee shots along the pond on the Par 3 16th during their practice rounds while trying to knock it close. Players will hit their regular tee shots then move up to the downslope just short of the pond that serves as the perfect spot to hit a stinger along the water. Some players get lucky, while some embarrass themselves.

On Tuesday, all the luck was on Jon Rahm’s side. With the pin in the back-left portion of the green, Rahm skipped his tee shot along the water and used the severe right-to-left slope of the green, and pulled off the unthinkable.

It’s even better with sound 🔊pic.twitter.com/CtpGlo89m6

Maybe the craziest part of this whole thing is that this was his second hole-in-one in two days. He made an ace on the Par 3 4th on Monday.

Hole-in-one’s are always special, even more so at Augusta National. Here’s to hoping it happens again later this week! @themasters Thanks to @rickiefowler for the 🎥

Plenty of people out there probably watched that video and had two different reactions. After the initial shock of seeing a human skip a golf ball across water and making a hole-in-one, some folks out there probably felt upset about their own golf game. Some people would struggle just getting their tee shots over the pond on the short Par 3 and Rahm is out here hitting trick shot hole-in-ones on the game’s grandest stage.

This is the first highlight of the week where the absence of patrons is just absolutely brutal. Fans would have gone absolutely wild witnessing that moment. The 16th hole during practice rounds is pure theatre as fans yell at players to ‘skip it! skip it!’ but unfortunately we don’t get that at this year’s Masters.