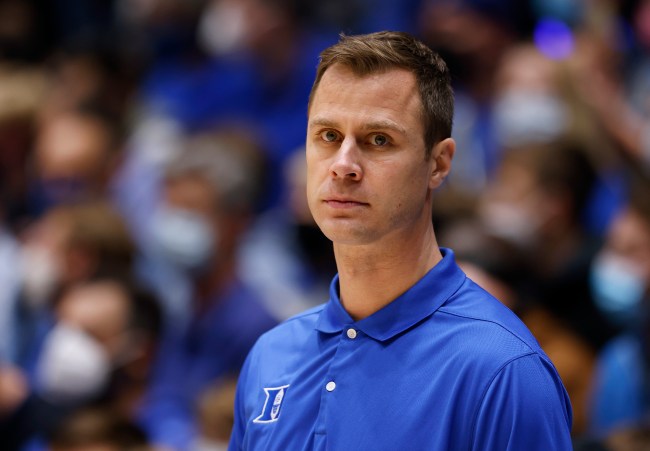 We all knew we’d see Jon Scheyer at the helm of the Duke basketball program someday soon. Tonight we’ll get an early glimpse at at what his reign will look like.

It was announced today that Coach K will miss Duke’s road matchup tonight with Wake Forest because of an illness. As a result, Scheyer will take on head coaching responsibilities tonight.

Duke's Mike Krzyzewski is OUT for tonight's game at Wake Forest due to a non-COVID illness, per release. Associate head coach Jon Scheyer will serve as acting head coach.

College basketball fans took to Twitter to ask all of their questions about the situation at Duke.

does he get the L if they lose or only the W if they win? Please let us know Jon

Wait… does this mean Wake Forest won’t be able to say goodbye to him?? This is a nightmare

Duke will be looking to bounce back from a very disappointing home loss to Miami in tonight’s game. They’ll have to get past a tough Wake Forest team. Wake is currently 13-3 overall and 10-0 at home.

A Duke win would be a great start for Jon Scheyer as he tries to replace a college basketball legend. Tonight, we get our first look at the future of the Duke Blue Devils.