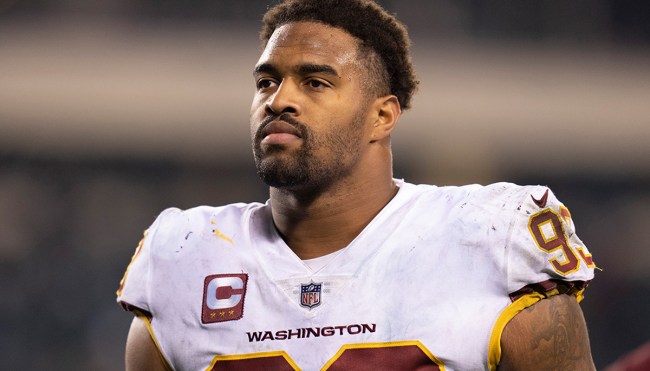 The Hypothetical Dinner Guest Game is a fairly well-known conversation starter that provides you with the chance to get a look inside the mind of whoever is tasked with naming who they’d choose to share a meal with if given the opportunity to dine with anyone who’s ever walked the face of the planet.

Would they choose to meet their favorite celebrity, reunite with a lost family member, or break bread with a famous historical figure? In the case of Jonathan Allen, the answer to all of those questions is “Yes,” as the Washington Commanders defensive tackle took the opportunity to assemble his ideal trio after a follower asked him about the scenario during a Twitter Q&A on Wednesday morning.

You can have dinner with three people, dead or alive. Who are you inviting?

Now, before I continue, I need to stress that Allen had the chance to simply not answer this question but opted to do so out of his own free will. You may be wondering why I’m prefacing his answer with that reminder, but I can guarantee you’ll understand as soon as you take a look at his selections (in the least surprising twist ever, Allen deleted the original tweets but forgot the internet never forgets).

My grandad, hitler and micheal Jackson

Grandad? Makes sense. Michael Jackson? Not for everyone, but I get it. Hitler? Uhhh, not so much.

Allen did attempt to explain his rationale after the person who posed the initial question asked him to expand on his thought process, but it’s safe to say it still left a bit to be desired.

He’s a military genius and I love military tactics but honestly I would want to pick his brain as to why he did what he did. I’m also assuming that the people I’ve chosen have to answer all my questions honestly

It didn’t take long for the tweet to start making the rounds, and plenty of people chimed in to express their disbelief and contest Allen’s claim about the military prowess of the man who shot himself in the head to avoid being captured by the Allied troops who foiled his vision of a global Aryan ethnostate.

A military genius doesn’t try to invade Russia in the winter.

I see why Daron Payne wanted to fight you now

This is an awful take, you should think about what you are saying.

Dude seriously just a piece of advice, maybe delete this. This is a baaaaaaad take.

I assume everybody has basically already covered this, but you don’t have to wonder why he did what he did, he wrote a whole awful book about it 🤦🤦‍♂️

It’s hard to believe a self-avowed lover of military tactics would make this kind of unforced error, but here we are.

Allen issued an apology after deleting the tweets on Wednesday afternoon.

Early I tweeted something that probably hurt people and I apologize about what I said. I didn’t express properly what I was trying to say and I realize it was dumb!