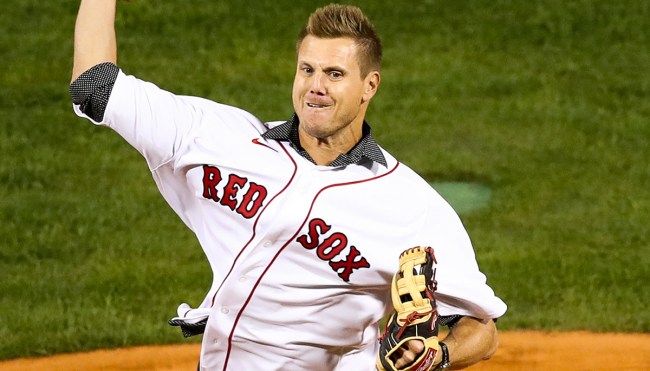 For the most part, throwing out a ceremonial pitch before a baseball game is a pretty straightforward affair: whoever’s been tapped to kick things off trots out onto the field, throws a casual lob at the catcher, and poses for some photos before the real action finally gets underway.

With that said, there have been plenty of people who’ve managed to turn those symbolic tosses into a notable story for all of the wrong reasons. 50 Cent has still failed to live down the disastrous first pitch he threw ahead of a Mets game in 2014, but he’s also had some worthy competition, as Conor McGregor gave him a run for his money at Wrigley Field earlier this year and a Red Sox fan saw things go slightly awry when he nailed a photographer in the balls in 2017.

On Monday night, we were treated to another newsworthy pitch at Fenway Park courtesy of Jonathan Papelbon, the fiery closer who played a key role in the Red Sox World Series win in 2007.

Papelbon was invited to throw out the ceremonial pitch prior to Boston’s ALCS matchup against the Astros, and he got the crowd amped straight out of the gate while storming to the mound from the center field tunnel.

Papelbon sprints out from the centerfield tunnel to deliver the opening pitch! pic.twitter.com/Ax8gMpFCjP

While some people elect to deliver the first pitch from the grass in front of the mound, the 40-year-old Papelbon not only opted to toe the rubber but proved he can still throw some gas by delivering a laser that was clocked at 91 MPH on the scoreboard.

Jonathan Papelbon delivers the first pitch as “I’m Shipping Up To Boston” plays at Fenway. pic.twitter.com/VIkiyVoqd6

Jonathan Papelbon just threw a 91mph fastball in for a ceremonial first pitch, at least according to the Jumbotron pic.twitter.com/BVZ8MXCQ39

It was one hell of a way to set the mood for the night, and the Red Sox rode the momentum on their way to a 12-3 win to take a 2-1 lead in the series.