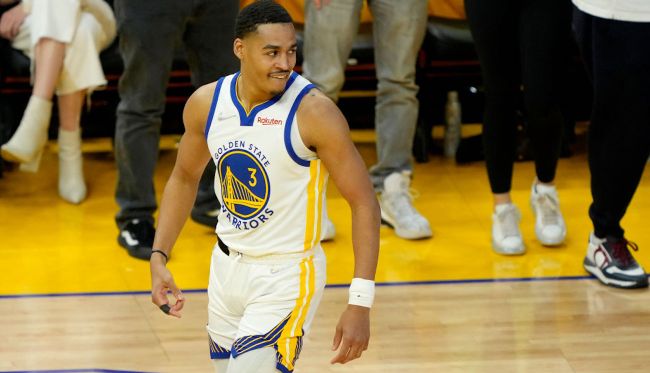 After losing Game 1 on their home court, the Golden State Warriors stormed back in Game 2 to tie the series up at one game a piece, thanks in part to the efforts of third-year guard Jordan Poole, who chipped in with 17 points.

Three of those points came on a half-court shot at the end of the third quarter, which effectively served as the final nail in the Celtics’ Game 2 coffin.

Poole didn’t start the game on fire, though, as a hilarious viral clip suggests that Poole started cooking from deep once he saw some attractive fans sitting courtside.

(Editor’s Note: the original viral video with 100K+ likes was deleted, but this video below is the same one).

nah Jordan Poole saw that female courtside and started to act like a menace on the court aint no way😭😭😭 pic.twitter.com/16OjzT2qwJ

Jordan Poole, Steph Curry, and the rest of the Golden State Warriors — playing in their sixth NBA Finals in the last eight years — will look to take a 2-1 lead in the 2022 NBA Finals when they travel to Boston for Game 3 on Wednesday night.