Jordan Spieth Gets Caught Blaming His Caddie For Two Bad Shots, Twitter Has At Him 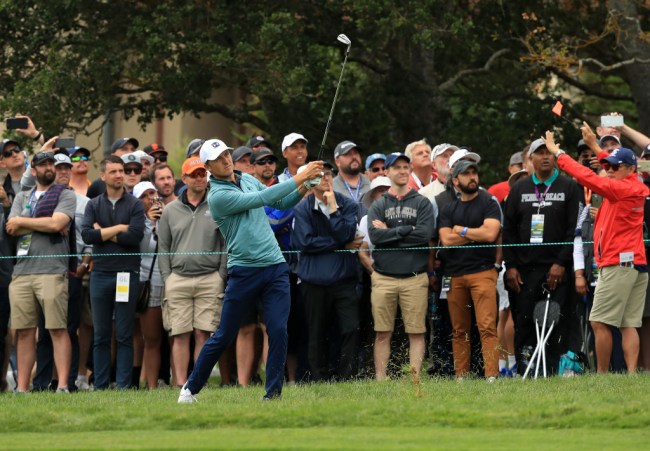 Jordan Spieth has always been a vocal player on the course. Whether it be assessing the shot and situation at hand or chatting it up with his playing partners, he’s a guy that’s always talking.

While playing the eighth hole during his first-round at the U.S. Open on Thursday Spieth found some trouble and FOX picked up a not so great soundbite.

The trouble began off the tee for Spieth as his ball ran out too far and fell off the cliff. After taking a drop he stepped to his approach shot and air-mailed the green finding the thick rough. After the approach, Spieth let his caddie Michael Greller know exactly how he felt about the situation saying “two perfect shots, Michael, you got me in the water on one and over the green on the other.”

Jordan Spieth just completely called out his caddie on national TV. Whether the caddie misjudged it or not, that's a bush league move. At the end of the day, you're the one hitting the golf ball.#USOpen pic.twitter.com/lFSYQSGrvR

As you can imagine, Twitter went after Spieth pretty hard.

Listening to Jordan Spieth talk on the golf course makes me want to vomit. He is always the victim, always the most unlucky player on earth, and he talks like a spoiled entitled country club brat. Every time I’m like he couldn’t possibly whine this time.. yet he does. #usopen19

"Two perfect shots, Michael. You got me one in the water and one over the green."

That's a LONG way from the Jordan Spieth who used to only use the first person plural when discussing his success so he'd always give credit to his caddie and deflect success.

This is never a good look for a player, it doesn’t matter the situation. There are two ways of looking at it, however. These players have their yardages and irons down to a science that us normal people can’t really fathom. Spieth and Greller assessed the shot and the wind and Greller gave him the greenlight in both scenarios. Spieth simply flushed both shots and was penalized.

Don’t understand why Spieth is getting shit for giving shit to Greller. He didn’t hit bad shots. He flushed shots with a club based on yardage and wind estimation from his caddie. That’s on his caddie. #USOpen

On the other hand, Greller is the guy handing the clubs over, not swinging them.

When it was all said and done the damage wasn’t too bad for Spieth. He went on to get up-and-down from over the green sinking a 10-foot bogey putt. He is currently in a tie for 85th at 2-over as he plays the 13th hole at Pebble Beach.