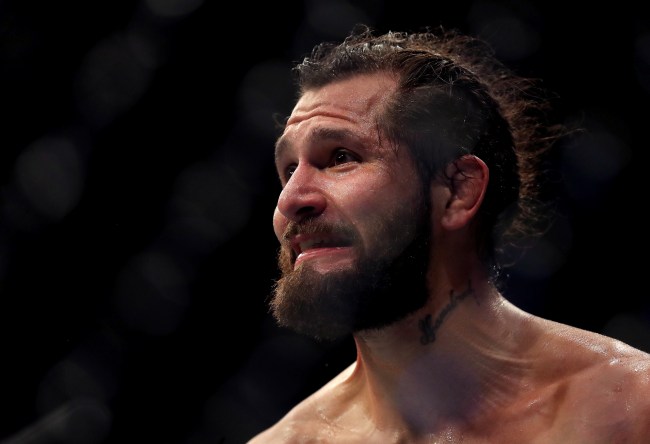 While engaging in a post-event interview, Leon Edwards, who secured a split-decision win over Gunnar Nelson on the undercard to win his seventh straight match, injected himself into the conversation. Edwards yelled to Masvidal off camera and the Cuban American replied, “Come over here, say that to my face,” before walking over to confront him. Masdival struck Edwards with a lightning quick three punch combination that opened up a visible gash under Edward’s left eye.

Here's a much longer video of the Jorge Masvidal / Leon Edwards altercation backstage at the o2 arena. Edwards recieved a pretty nasty cut under his left eye. #UFCLondonhttps://t.co/B2IcWVUd1C pic.twitter.com/MThTehGMGY

Police were reportedly called to Masvidal’s hotel room to follow up on the incident.

Sources say local police is currently at the fighter hotel in London investigating the Masvidal-Edwards altercation. Edwards suffered cuts to the face. They were talking smack backstage and it obviously escalated.

Masvidal told ESPN’s Brett Okamoto why he released his hands from behind his back to deliver a bare-handed combination to the face of Edwards.

“So I’m doing my interview, and this hooligan comes by saying some stuff. [He says] ‘July, you’ll get your ass kicked in July.’ And I go ‘Maybe bro, cause whatever, maybe I want to kick your ass in April. Maybe I don’t want to wait till July. Maybe I don’t even want to fight you cause you’re not worth the training camp. I’ll fight you here, you’re a scrub.’

“So I tell him ‘Just say it to my face like a man. You’re saying it walking away. We’re both men.’ As I walk up to him, I’ve got my hands behind my back to signal I’m not coming here for problems. But he put his hands up like this [raises fists]. It’s on video, and he walks towards me. Well, where I’m from, if you do that, you’re going to punch me in the face. That’s not going to happen. You’re a JV beta. You are what you are bro, you’re just a loser in life. You’re not going to get a hit off on me. So I did the three piece with the soda, and then just glided out of there. Then some of his friends tried to sucker punch me… those guys did a big mistake.”

Edwards took to Instagram to pay hus respects to UFC London opponent Gunnar Nelson before issuing a warning to Masvidal.

And Jorge, fair play sneaking your shots in when you could, But now you’re fucked. If security wasn’t there you wouldn’t have made it back to the US, I’ll see you soon.

Masdival will likely wind up in the top 10 rankings after his win over Darren Till, and a victory over someone of Masdival’s caliber would do wonders for Edwards’ clout. This fight’s gotta happen.