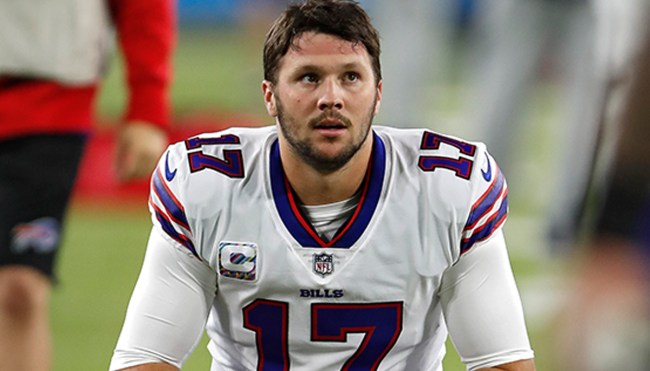 The Buffalo Bills face off against division rival New England on Saturday in the opening round of the NFL playoffs. The two teams split their regular season matchups with each winning a game apiece. One of those matchups came in Buffalo with temperatures falling below freezing in early December.

The Patriots wound up winning that contest 14-10 in what was a low-scoring slugfest. Bills quarterback Josh Allen threw for just 145 yards on 50% passing. That performance became the latest part of a developing trend regarding the signal caller’s play when weather conditions are less than ideal.

In the five cold-weather games (temperatures below freezing) that the Bills have played this year, Allen is completing just 50% of his passes. He’s throwing for less than 170 yards a game and has tossed more interceptions than touchdowns.

That doesn’t bode well when facing a Patriots defense that boasts JC Jackson in the secondary. Jackson leads the AFC with eight interceptions on the season.

Luckily, there could be a quick fix for the quarterback’s struggles in freezing temperatures, and it comes in the form of a little blue pill. Analyst and former NFL linebacker Bart Scott suggested that Allen and the rest of the Bills players pop a Viagra to keep the blood flowing in the cold climate.

An interesting solution, to say the least.

With Bart Scott’s suggestion that Josh Allen should take Viagra to help with his circulation in the cold, we remind you that it was six years ago, when the Patriots came to Buffalo, that a phallus was thrown on the field. https://t.co/n29ajCp1kH

Allen will look to erect a game plan that yields better results while playing in the cold weather this time around. The Bills and Pats kick things off at 8:15 PM tonight in Buffalo.