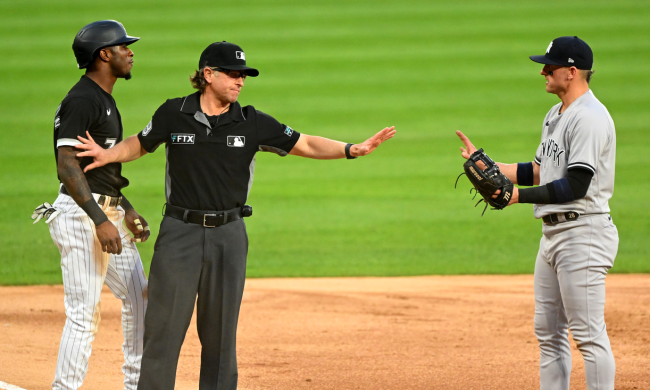 During last Saturday’s game between the Yankees and White Sox, New York third baseman Josh Donaldson and Chicago shortstop Tim Anderson got into an altercation after Donaldson called Anderson “Jackie.”

It was the second dustup between the two players in two weeks as in the previous series between the teams Anderson took offense to Donaldson leaning on him during an attempted pickoff play at third.

Benches clear after Tim Anderson and Josh Donaldson get into a little tizzy. pic.twitter.com/7xyXLynLYO

Donaldson, upon seeing Anderson during Saturday’s game, asked him in the first inning, “What’s up, Jackie?”

Anderson took offense to the remark even though Donaldson claimed he was referring to a 2019 Sports Illustrated article in which Anderson referred to himself as “today’s Jackie Robinson.”

“In the first inning, I called him Jackie, let me give you a little context on that,” Donaldson said after the game. “In 2019, he came out in an interview and said he was the new Jackie Robinson of baseball and that he was going to bring back fun to the game. In 2019, when I played in Atlanta, we joked about that in the game. I don’t know what’s changed from then.”

Donaldson received a one-game suspension from Major League Baseball, was fined an undisclosed amount, and is appealing the suspension.

Many, including Stephen A. Smith, didn’t believe what Donaldson did, especially given his explanation, warranted a suspension.

I don't think Josh Donaldson should have been suspended at all. pic.twitter.com/VQ0Slm8FJr

Josh Donaldson apologized for his “Jackie” remark, but not everyone is buying it

On Thursday, Donaldson, who is no stranger to having to mend fences, issued a statement apologizing to Anderson and the family of Jackie Robinson.

“First and foremost, I have the utmost respect for what Tim Anderson brings to the game of baseball. I stated over the weekend that I apologized for offending Tim and that it was a misunderstanding based on multiple exchanges between us over the years. My view of that exchange hasn’t changed and I absolutely meant no disrespect. In the past, it had never been an issue and now that it is, we have a mutual understanding.

“I would also like to apologize to Mrs. Rachel Robinson and the Jackie Robinson family for any distress this incident may have caused. Jackie was a true American hero and I hold his name in the highest regard.”

Major League Baseball fans had a wide variety of reactions to Donaldson’s apologies.

Does Tim know this 🤔

Oy. So overblown. Anderson got mocked for comparing himself to a legend and got all pouty about it. I keep turning it around in my mind trying to find the offensive part, and I still can't. 🤦

No he did not apologize. Saying “for any distress this *may* have caused” isn’t a real apology. Donaldson doesn’t really mean his fake apology

It took him and his PR people five days to come up with this?