The Internet Reacts To The Cleveland Browns Releasing Josh Gordon 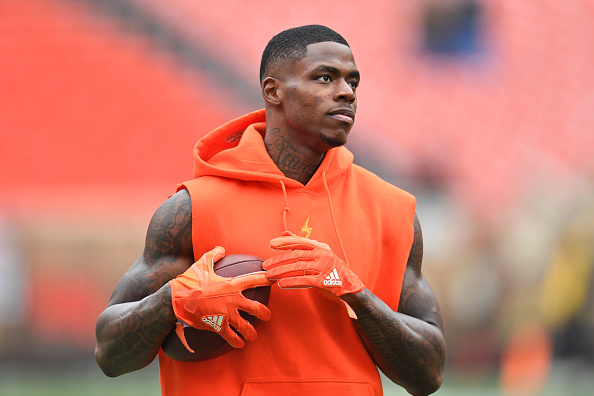 Josh Gordon is no longer a Cleveland Brown. Today, the Browns released a statement announcing that they planned to release the troubled wide receiver on Monday.

“This afternoon we informed Josh Gordon and his representatives that we are going to release him on Monday. For the past six years, the Browns have fully supported and invested in Josh, both personally and professionally and wanted the best for him, but unfortunately we’ve reached a point where we feel it’s best to part ways and move forward. We wish Josh well.”

Once the #Browns let him go, Josh Gordon will be subject to waivers. He doesn’t immediately become a free agent. The waiver wire order is the same as the 2018 draft order. So, the #Giants first, then the #Colts and so on.

Update: Apparently the Browns were worried that Gordon had relapsed when he showed up to practice.

The Browns are finally parting ways with troubled receiver Josh Gordon after he showed up late to the facility on Saturday morning and was ‘not himself,’ league sources told cleveland.com.

They’re releasing him on Monday and finally closing the book on the long saga of substance abuse, suspensions, second chances and redemption.

Team doctors examined Gordon, and in addition to a hamstring issue, there was concern that perhaps he had relapsed and was struggling with his substance use again.

He was told to stay home from the team’s trip to New Orleans for tomorrow’s game against the Saints, and one source said he was mad at himself for letting the team down.

#Browns source just told me WR Josh Gordon "just seems like he can't get right. Feels like something is wrong."

Browns fans were of course upset over Gordon’s release.

God damn Josh Gordon you did it to us again pic.twitter.com/kn980LrVqX

I was really rooting for the Browns. Cutting Josh Gordon isn't it! 🤦🏽‍♂️ https://t.co/UULdjG7E6S

Really @JOSH_GORDONXII? I was rooting for you to turn your life around, but you knew you were on thin ice with the team. Expect @dezbryant to get another call #smh @ Sage Restaurant and… https://t.co/ERH41hPvfa

Josh Gordon has sooooo much talent and so many demons. I will always pull for those who battle addiction. Always

And then there were Patriots jokes.

Josh Gordon gonna have 18 touchdowns by Week 11 after he signs with the Patriots and we're all gonna be SICK 😂😂 pic.twitter.com/n0eDdhguKm

Dorsey will put up w/ talented guys with issues.
Haslam has nixed Josh Gordon trades in the past.

For this move to happen now, I'd guess another suspension is coming… https://t.co/BKUuVl8Q7p

Josh Gordon is about to let Tom Brady play another 10 years when he signs with New England on Tuesday.

Josh Gordon won’t sign with the Pats because he’s got number 12 tattooed on his back pic.twitter.com/YFeocl9cBF