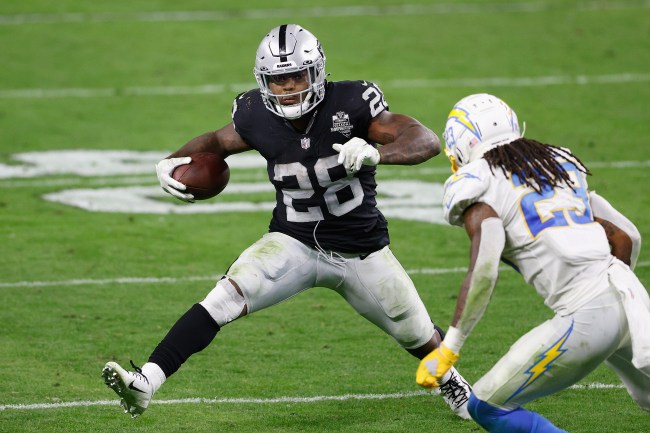 When news broke last week that Las Vegas Raiders’ running back got in a single-car crash occurred near the Las Vegas airport at around 4:42 a.m. Monday morning after a night at a karaoke bar (and after a two touchdown performance), I retrieved my Jump To Conclusions map from under my bed and decided he must’ve been plastered.

Add that with the responding officer claiming to smell a “moderate odor of an unknown alcoholic beverage” and a head wound the size of Darren Sproles, I was more steadfast in my hypothesis.

In a shcoking turn of events, it has since been reported by TMZ that the 22-year-old’s blood alcohol level was below the legal limit and therefore DUI charges are not being filed against him.

David Z. Chesnoff and Richard A. Schonfeld, who are repping Jacobs in the case, say the 22-year-old running back was only charged with failure to exercise due care by the district attorney on Monday.

FYI, failure to exercise due care is generally regarded as a minor offense … usually punished with fines and community service.

Clark County District Attorney Steve Wolfson claimed that due to Jacobs driving behavior, his office has filed a Criminal Complaint for one misdemeanor count of Duty of Driver to Decrease Speed Under Certain Circumstances. Which sounds a lot better than DUI.

Despite his questionable choice in this particular incident, it’s hard not to root for the Crimson Tide product, who grew up sleeping in his car before being selected by Jon Gruden in the first round of the 2019 Draft.