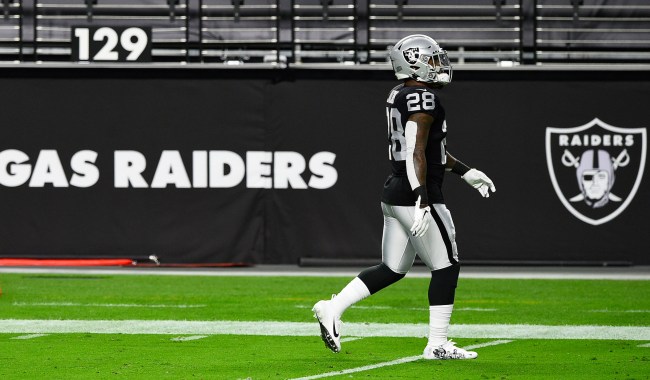 Las Vegas Raiders’ running back Josh Jacobs is one of the NFL’s feelgood stories as, after being homeless growing up, he was able to buy his dad a house once he made it to the NFL.

Unfortunately, like many of us have done when we were 22-years-old, he made a very bad decision in the early morning hours on Monday when he got into his car, crashed it, and was arrested for DUI.

After rushing for 89 yards and two touchdowns in the Raiders’ wild win over the Broncos on Sunday and with his season having come to an end, Jacobs returned to Las Vegas and hung out with some friends at a karaoke party.

Jacobs’ lawyer strongly denied his client was drunk when the single-car crash occurred near the Las Vegas airport at around 4:42 a.m. Monday morning.

The police report states officers smelled a “moderate odor of an unknown alcoholic beverage” as Jacobs tried to explain what happened.

When Jacobs, who did admit he had been drinking before the crash, was given a sobriety test after being transported to the hospital he reportedly passed.

What can’t be denied is the fact that Jacobs did some serious damage to not only his car, but to his head, as his mug shot revealed numerous stitches from what appears to be a very large gash in his forehead.

As one Raiders fan so astutely pointed out, the photo of Jacobs with the stitches in his head makes him resemble another person in the Raiders organization.