Salty Jozy Altidore Calls Taylor Twellman A ‘White Boy With Connects’ After His Criticism Of U.S. Soccer Failing To Qualify For Olympics 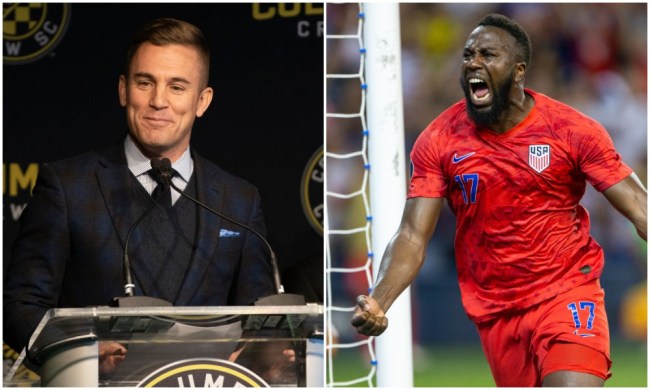 Jozy Altidore isn’t taking Taylor Twellman’s criticism of the U.S. men’s national team very well after it failed to qualify for the 2021 Olympics, the third consecutive Olympic men’s tournament the team has failed to qualify for. Altidore ripped into Twellman on Twitter and brought race into the conversation calling him a “white boy with connects.”

After the U-23 men’s team fell to Honduras to miss out on the Olympics, Twellman criticized the U.S. Soccer from just about every angle. Twellman, who played 30 times for the national team in the early 2000’s, is no stranger to voicing his frustrations with U.S. Soccer. His rant about the Americans missing out on the 2018 World Cup went viral back in 2017.

One of the bigger takeaways from Twellman’s rant this time around came when he said Christian Pulisic and Weston McKennie not being part of the team was just an excuse. Both players are under 23-years-old but were away with the senior team during qualifying. He also said until things change, the narrative of “the United States man can’t do it when it counts” will continue.

All of this struck a serious nerve with Altidore, who has 115 caps for the U.S. team but hasn’t appeared since July of 2019.

“Taylor twellman national team career was laughable,” Altidore tweeted. “Beasley should be that analyst or a Mia Hamm. Twellman need to be on extra time radio with Bobby warshaw. He a white boy with connects. Stop giving him a platform.”

While Twellman’s national career wasn’t anything to write home about – he scored six goals for the U.S. – Altidore going after Twellman like this, when he said nothing about Altidore at all, is a bit odd. He then fired off another tweet about Twellman and members of the media only promoting the negative side of things, and never the positive.

“That’s fine. My problem is this. I’m not Messi or the best to ever do it. For USA or anyone. But Im sure as hell not a failure! I thrived in a game where it’s hard for kids that look like me to thrive in the US. We don’t promote the positive side. Only negative.”

To Twellman’s defense, there is zero positive in the fact that the U.S. men’s national team has missed out on three straight Olympics. What does Altidore want Twellman to say, that the team ‘tried hard’ or something?

Altidore’s tweets come across as nothing but salty and nieve. He sounds like he’s struggling to cope with the fact that both the U-23 team failed and that the senior squad, which doesn’t include him, is filled with the most talent U.S. men’s soccer has ever seen.

Twellman responded to all of this by sharing a tweet linking to Altidore’s foundation asking people to support his cause. Altidore’s response? “I don’t want nor need your charity.”