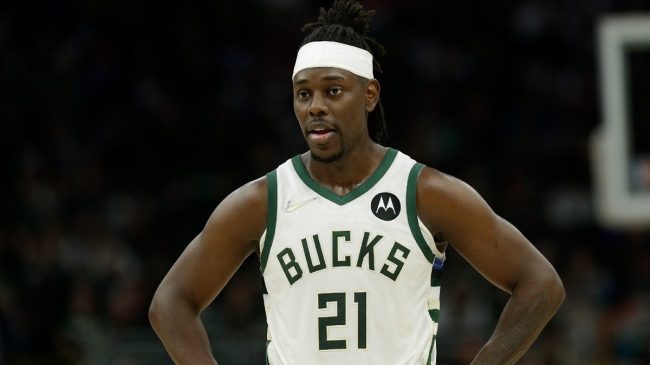 The regular season in the NBA will wrap up on Sunday.

The playoff picture is nearly set as teams make their final push for positioning in the postseason race. We already know the 20 teams that will be competing over the next few months (it won’t include the Lakers).

It will, however, include a number of deserving teams, beginning with an interesting play-in round and continuing into the opening series.

While the playoffs are right around the corner, not everything from the regular season was quite complete. In a matchup between the Bucks and Cavs, guard Jrue Holiday picked up a very important start in regard to his contract terms.

Jrue Holiday started for the Bucks today so he could reach 67 games played and secure a $306,000 bonus 💰

Holiday played eight seconds before committing a foul and heading to the bench pic.twitter.com/131ivz1q6l

Holiday picked up the start, which got him to 67 games played on the year. He promptly fouled a Cleveland ball handler and took his place on the Milwaukee bench.

The foul took all of eight seconds to commit, but it helped Holiday pick up an extra $306,000 by hitting an incentive in his contract. Not a bad day at the office.

The rest of the NBA was quick to take note of the bonus, including superstar LeBron James.

The quick exit helped Holiday unlock another $300,000 in his contract. Many around the NBA reacted to the guard’s brief appearance on social media.

Jrue Holiday commits a foul on the first play of the game. And Mike Budenholzer was not happy about it. Took Holiday right out of the game.

Eight seconds into the game and Jrue Holiday is done for the Bucks.

Time to kick back and relax.

It was cool as hell of the Bucks to play Jrue Holiday the first 8 seconds of the game. Why?

It allowed Holiday to collect on the last of his possible bonuses for the season. Had to get to 67 games played.

All this did was cost the Bucks money and they took care of their player.

Holiday averaged over 18 points a night for the Bucks this season. He’ll try to keep the year alive in the playoffs as Milwaukee aims to land another title.