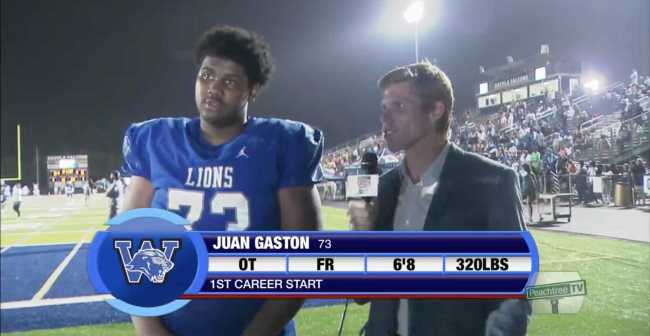 Juan Gaston is an absolutely massive human. At only 14 years old, he stands 6-foot-8, 320 pounds.

The Westlake High School (Ga.) left tackle made his first career start on Thursday night and looked like a man amongst boys. To put his size in comparison, Gaston stands taller than the top-five tackles selected in the 2021 NFL Draft and weighs more than all but No. 7 overall pick Penei Sewell…

… as a freshman in high school.

Now, there is always some slight inflation of numbers on a roster. Players, especially in a competitive hotbed like Georgia, are typically listed an inch or two taller than in reality and get some extra poundage added on. Regardless, Gaston is at least 6-foot-6, 300 pounds.

Considering that he has only played in one game, Gaston is not yet listed on recruiting sites but he is bound to be offered by every team in the nation. He will have his pick of the litter.

Just look at this m̶a̶n̶ kid go to work. His highlight tape from last season, as an eighth grader, is absurd. It really isn’t fair.

Gaston is all business.

Westlake High School entered the 2021 season at No. 15 in the Georgia High School Athletic Association preseason rankings and Gaston surely had something to do with that. His size on the blindside is simply unmatched on literally all levels of the game— high school, college and NFL.

Westlake beat Archer 29-14 to begin the year 1-0. Gaston spoke with Craig Sager Jr. (yes, that Craig Sager) after the season opener and is a man of few words. He is all business.

A random guy crashed the interview and made for a hilarious, but uncomfortable, moment.

High School Football puts a smile on my face & I loved this post-victory interview. Watch out for Westlake this season & Class of 2025 OT Juan Gaston on a loaded O-Line pic.twitter.com/OSucCAt6AW

Gaston, who also plays basketball, is a name to know now. He’ll be playing left tackle at Alabama, Clemson, Georgia, or another powerhouse program in four years.