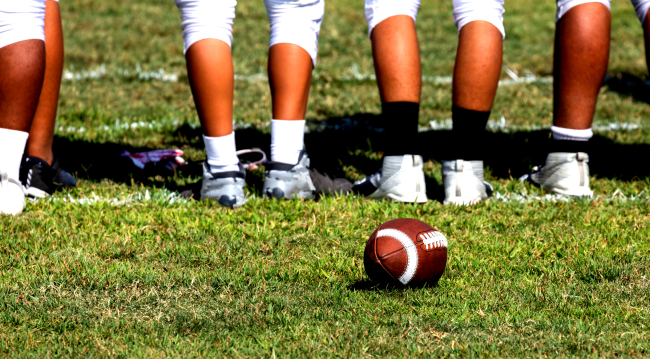 That domination is certainly helped along by the fact that he is just 13-years-old.

“I’ve been this size since I was 9,” said Green, who turned 13 in June and has been playing for the 309 Punishers – a youth football travel team. “I love football. It’s fun, sometimes guys ask me not to crush them.”

The ref tried to call me soft so I had to show him who I am pic.twitter.com/K3rZn5Vw6g

“It’s a blessing to have an offer from a D-I school, I could never afford to go to college otherwise,” said Green. “It’s amazing. I went to a tournament in Kansas City, and someone made video of me playing there and put it out there, and the next day Morgan State called and made me an offer.

Related: 6-5, 260LB Defensive End Goes Viral Because He’s About To Be A Freshman… In High School

“He can play anywhere on the field,” 309 Punishers founder Demarko Harris said about Green. “Literally, no one can stop him. He’s played every position on the offensive line, plus defensive tackle. He’s such a humble kid and so smart and coachable. As soon as his tape got out online, he got a D-I offer. He has a great future.”

Green is already working with a personal trainer, Logan Tuley-Tillman out of Texas.

Tuley-Tillman is very familiar with what it’s like to be someone like Jaquarius Green. He too attended and played football at Peoria Manual High School, and he is 6-foot-7, 320 pounds himself.

After high school, Tuley-Tillman went on to play three years of college football at Michigan and one year at UTEP, before moving up to play offensive lineman in the XFL for the DC Defenders.

Now he owns and operates the LT2 Football Academy in Dallas, which is why Green is considering a move to Texas.