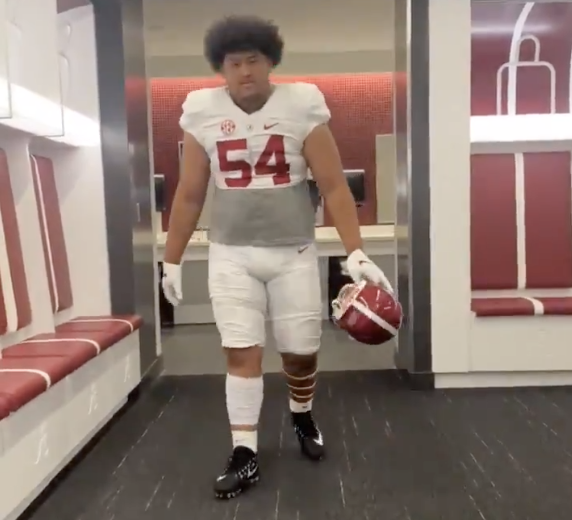 Nick Saban is already looking ahead at Alabama’s 2024 recruiting class and has one target in mind. Crimson Tide offensive line coach and former Jaguars head coach Doug Marrone recently hosted OL prospect Isendre Ahfua on campus and offered the 14-year-old a full-ride to play in Tuscaloosa. It is the Seattle-native’s fourth offer, along with USC, Utah and Nevada, but it certainly won’t be his last.

Offering a class of 2024 recruit in 2021 might seem insane. However, Ahfua is an absolute unit. Still three years removed from college, he stands a massive 6-foot-5, 330-pounds (ish). He’s so big that the school didn’t seem to have a uniform that fit him properly on the visit. Look at the sheer size of this kid.

Although Ahfua plays both offensive and defensive line (and a little bit of fullback) at O’Dea high school in Washington, he is being recruited primarily as an offensive prospect. Currently playing at the guard position, he towers over the vast majority of his opponents.

.@IAhfua only 14 years old 6-4 340 already holds offers from USC, Utah, and Nevada! Could be one of the nations best! @AlabamaFTBL Camp! pic.twitter.com/wA9aeoS0cI

Watch him pull from the left guard spot and bulldoze the defender with minimal effort.

Now that you’ve seen what he can do on the high school level, look at “Big Poppa” Ahfua AS AN 11-YEAR-OLD. ELEVEN!!!!

Ahfua doesn’t have a player rating yet, as he is only a rising sophomore, but he will likely be a five-star recruit when it is all said and done. O’Dea had its fall season postponed due to COVID-19 and played eight games this spring, going 6-2. Next season will be Ahfua’s first full year on the high school level and already enters with a full-ride to the nation’s top team.