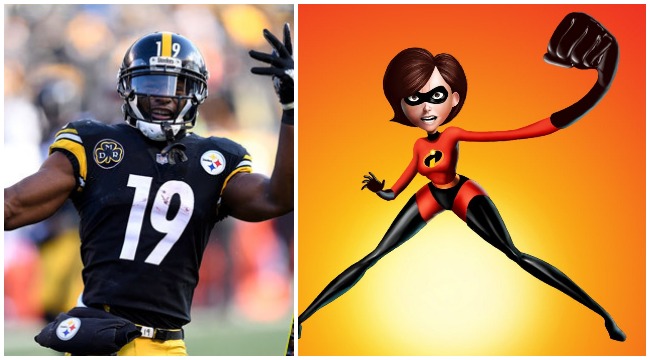 We’ve all been on the unnamed sites that we open in Incognito mode and have immediately been met by a banner  of the lovely Lois Griffin engaging in an act unfit for cable television. We contemplate the click, but the shred of integrity we have left prohibits it. Probably good for everyone, including Peter Griffin.

Steelers’ receiver JuJu Smith-Schuster is evidently not one of those dudes, he’s a pixel pounder, as I like to call them. JuJu decided to take the road less traveled in shooting his shot on the internet, directing his desires toward a Elastigirl from The Incredibles franchise.

ElastiGirl, hear me out. I know we known each other for 5 hours. But you’re the love of my life! Never seen a combo of beauty and savage like you before! We can spend rest of our lives fighting crime together! JuJu & ElastiGirl the Duo the World needs! #Thickkkk #Incredibles2 pic.twitter.com/dY5zcbaJui

Myles Garrett, 2017’s number 1 overall pick in Smith-Schuster’s draft class, zeroed in on the character trait that is so attractive about Elastigirl. Is it her courage? Her sharp wit and unparalleled espionage skills? Her ability to stretch any part of her body up to 300 feet? Nah, bruh. Everyone agrees on one thing.

You just want her thiccness..

day 107 without sex : ELASTIGIRL IS THICC AS FUCK

Elastigirl got that wagon

We’ll let you know if this love story is meant to be or not.

Until then, I think I need to take a shower.