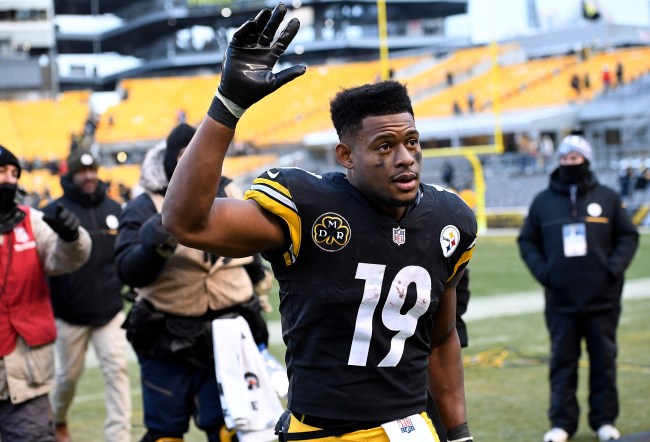 At just 21 years old, JuJu Smith-Schuster finished his rookie season with 58 receptions for 917 yards and 7 touchdowns. The USC alum grabbed headlines weekly for his hilarious antics both on and off the field–whether it be documenting the saga of his stolen bike or celebrating a touchdown with an unparalleled tribute to the movie Elf.

JuJu sought some retribution for the Steelers controversial loss to the Patriots in Week 14 in a photo with a star-struck Pats fan. The fan, who was rocking a Tom Brady jersey, approached JuJu for a picture. Smiling ear-to-ear, the fan probably thought he was getting a photo for his mantle, but if you look closely, you’ll notice that things are not as they appear. 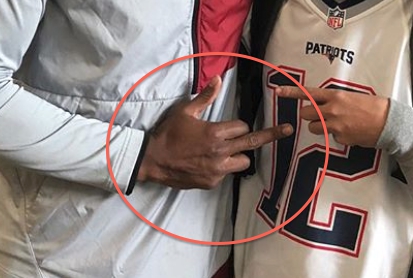 Boom roast. A small victory, despite being bounced from the playoffs and watching two despised teams duke it out for football supremacy from your couch.

While we’re on the topic of rich athlete fan photos, here’s a few good ones.

Tim Tebow is holding this baby. Said baby is crying. I wonder if it's tears of joy, or the opposite? pic.twitter.com/LBDmt9lc

Find you a girl who greets you like Drake greets Boogie Cousins when you come home from work.

DeMarcus Cousins on BLAST 😂 “@miilkkk: Drake the type to hug the players who miss shots pic.twitter.com/UESkd69oLu”

Jesus, Drake. You’re a multi-platinum artist. Act like it, fangirl.

And maybe the GOAT fan photo. This one’s just too cute.

Today is the anniversary of the greatest fight of all time…Ron Artest vs. Random Pistons Fan pic.twitter.com/iUq3zB9f8h