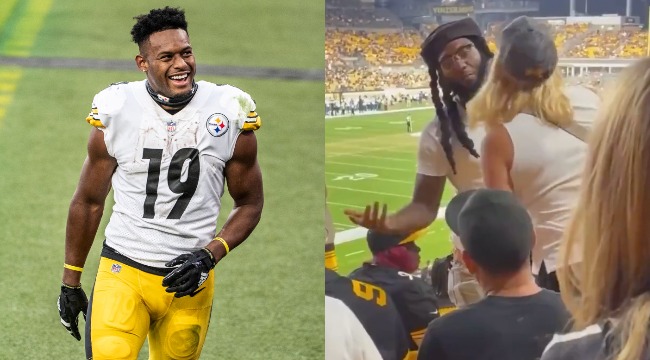 How many of you thought that a year-plus long global pandemic would instill in society a collective empathy and appreciation for fellow human beings?

Less than one week after haymakers were thrown and buttcracks were exposed at SoFi Stadium, a brouhaha erupted in the stands of Heinz Field Saturday after a woman slapped a man in the face during a game between the Pittsburgh Steelers and the Detroit Lions.

While at the time of this writing it’s unclear exactly what set the melee off, another video shows the woman screaming in the face of her partner(?) before he eats a couple fists in her honor, despite having the advantageous higher ground.

Steelers fans, you can’t be losing fights when you have the high ground. It’s embarrassing

After the Steelers 26-20 win over the Lions, JuJu Smith-Schuster chimed in who he believes acted ethically in the ugly scene.

“She slapped him first lol pops always told me, if he put hands on me first! I’m on full go mode”

Maybe another lockdown ain’t such a bad idea.