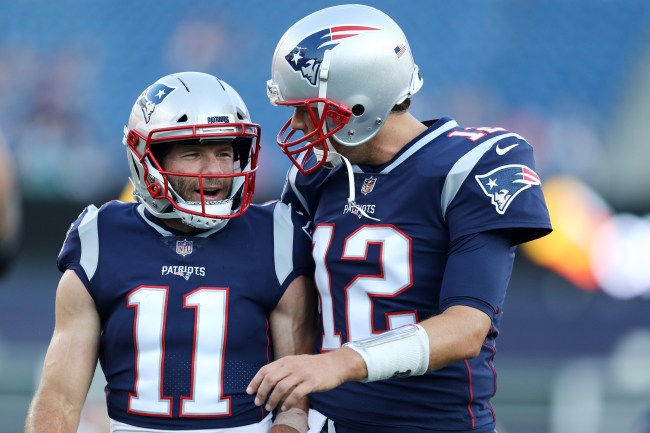 Countless NFL fans are collectively rolling their eyes at the New England Patriots playing up the underdog role before their AFC Championship matchup with the sexy Kansas City Chiefs and sexier Andy Reid. The Pats are 3-point underdogs heading into Sunday’s game at Kansas City, marking the first time in 69 nice games Tom Brady has started that Vegas has pegged New England as the weaker team.

On Wednesday, Edelman inadvertently assembled an “Oh, fuck off” brigade after posting a shirt available for purchase on his website throwing gas on the underdog flame.

It’s a nice shirt, I would have purchased it if the shelf-life of relevancy wasn’t a week. I’ve had problems with outdated Patriots shirts in the past.

Edelman’s tees were put up for sale on the heels of Touchdown Tommy saying “Everyone thinks we suck and we can’t win any games” following the Pats drubbing of the Chargers in the divisional round. People got pissed at Tom playing the ‘woe is us’ card because Brady has 2,883 playoff wins (don’t fact check that) and a half dozen Super Bowl victories (my clock is a month fast).

But the reality is is that sports media talking heads have been fidgeting in the back of the Patriots Super Bowl Shaggin Wagon for years now, constantly asking “Are we there yet?” like a bunch of children with full bladders dead-set on recognizing the end before anyone else does or a tired game of sports media punch buggy.

Tom Brady is older than hieroglyphics, Rob Gronkowski has had more invasive surgeries than Joan Rivers, Chris Hogan’s eyes make Adam Gase’s look like my dad’s when he’s trying to read a restaurant menu, and the ‘bend-don’t-break’ defense too often feels like Vince Wilfork on a diving board. It’s probable that the Patriots could suck (relatively) soon. THIS IS AN INEVITABILITY, NOT A HOT TAKE.

I feel like I’m at the movie theater watching Tom Brady play Mel Gibson in Braveheart and I can’t even take a spit of my Splurpee without someone in sports media telling me he dies at the end.

Is there any goddamn wonder why the Patriots are squeezing all the juice out of their underdog status like Patrick Mahomes trying to get the last drop of Heinz out of the packet??

Tell me again that the @Patriots are foolish to feel disrespected. #EverythingWeGot pic.twitter.com/Y2a83YCknM

This article is finished. Called it!