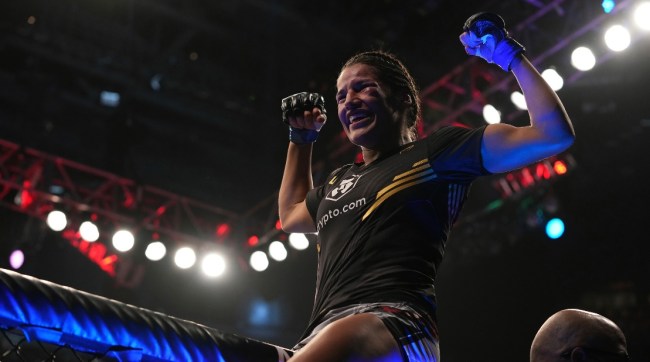 It didn’t take long in Julianna Peña’s reign as UFC champion for her to stir up controversy.

On Saturday night, Peña stunned the MMA world when she beat Amanda Nunes, who many consider the greatest female champion in the sport’s history.

Julianna Pena with the submission win over the GOAT Amanda Nunes! #UFC pic.twitter.com/SkUPLMJgJ1

During her post-fight press conference, Peña declared herself the first true first “Mom Champ” in UFC history because she actually gave birth unlike Amana Nunes, who adopted her child.

Julianna Pena says she should be considered the first "mom" champ and not Amanda Nunes because, "All respect to her, but I gave birth to my daughter." Says there should be a "baddest mom on the planet belt" made. #UFC269

“I’m not trying to take anything for Amanda, she’s a wonderful mother but I gave birth to my daughter and I feel like for giving birth I am the first mom champ”

Fans immediately felt Peña was being disrespectful to Nunes with her comments.

Such a wonderful person to be a role model as champion *sarcasm* https://t.co/AWrWu5CNuw

This is disgusting. I'm adopted. My mother couldn't "give birth" because she had cancer. Someone seeing her as less of a mother is truly despicable. https://t.co/KvJGEfKYR3