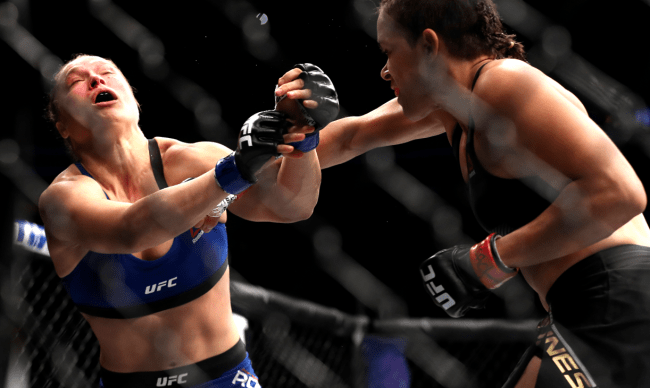 Current UFC women’s bantamweight champion Julianna Pena was the first woman to win The Ultimate Fighter. Pena was a member of Miesha Tate’s team which competed against Ronda Rousey’s squad during that season of the show.

Miesha Tate and Ronda Rousey are sworn enemies, this we know. What many did not know, until now, is that apparently Julianna Pena is also not a big fan of the rowdy one.

“Ronda is so old news, right?” Pena told The MMA Hour on Monday. “I think that what’s incredible about her is that she opened up the door and was destroying people in 10 seconds, and became a star because she was demolishing people in the first round, and that’s great — but she got knocked out twice and never came back. So how legit is she?

“She had to go to pro wrestling. And I get that and I think that that’s great. But as a fighter and somebody who is competitive, I know that — deep down — it probably truly bothers her, the fact that she went away off of two knockout losses and never came back to make her name good,” Pena continued.

“If it really truly does bother her and if it gets under her skin at the end of the day to know that, you know, her legacy is kind of ruined by the fact that she never came back and never got back on the horse, then I would like to invite her to please come back — and if she would like to come back, I would welcome her with open arms.”

“That’s what I’m saying, she’s kind of a joke in the MMA world now, because she’s a — what is the word? — sellout. Like, a little bit of a sellout there. I mean, I guess I understand, right? It’s like, pro wrestling is fake, you get paid millions of dollars, I get it. But for me, for real s–t, for like the ‘you’re the real, real deal,’ I would say that that’s in the UFC. And if she ever wants any of that real smoke, I’m ready.”

Related: Ronda Rousey Got Tattoos Commemorating The Times Of All Her MMA Wins, None Of The Losses

Many MMA fans do, in fact, want that smoke…

I am absolutely positive that she couldn't beat a single fighter in the top 15 now.

the game caught up with her and passed her by.

She was smart to take up acting (wrestling)

It’s kind of true , she left hella bitter since she didn’t know how to be humble in defeat , and besides meisha , “I’ll give her that one” she fought a bunch of girls that weren’t that good and as soon as she faced some real skill in holly and Amanda she got wrecked. Facts!

Nice statement but you’re wrong. Gina Carano put eyes on women in mma. Ronda took it to new heights but Gina is the O. Julianna will lose her rematch, she is awesome but not great.

Everyone is looking at this all wrong! Shes just trying to “poke the bear” to hopefully bring her out of retirement! How many other girls are calling/talking about Ronda? If she came out what do you think those numbers will look like?…🧐🤔