Ronda Rousey Got Tattoos Commemorating The Times Of All Her MMA Wins, None Of The Losses 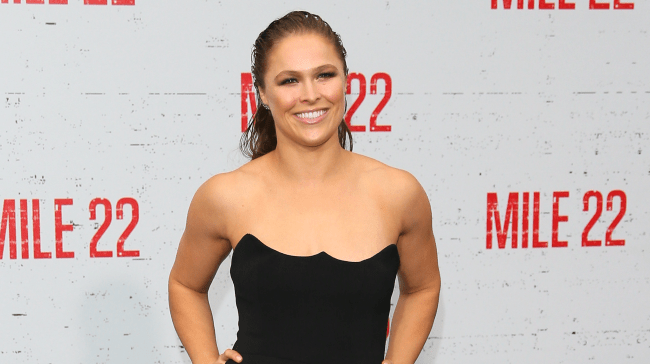 Remember when Ronda Rousey left the WWE so that she and her husband Travis Browne could have a baby back in early 2019 after spending a little over a year with the organization and setting the record for the longest reign as Raw Women’s Champion?

Well, that still hasn’t happened, but she did get some shiny new tattoos commemorating the times (in seconds) of all 12 of her MMA wins on her right forearm!

So she’s now got the number 25 on her arm for her first MMA win in King of the Cage over Ediane Gomes, the numbers 267 and 658 for her two victories over Miesha Tate – one in Strikeforce and one in the UFC, and 34 for her final MMA victory over Bethe Correia at UFC 190.

“How many seconds did it take to win my fights? It’s a crazy feat to see written out, don’t think I’ve ever relived and retold every one until that moment,” Rousey captioned the video on Instagram.

The two numbers missing from her new ink are 359 and 48 to signify her two defeats, both knockouts – one to Holly Holm and one to Amanda Nunes – before Rousey quit and walked away from the sport.

Throughout the video of Rousey getting her new tattoos she remembers how each win went for her, dropping an F-bomb about every six seconds along the way.

“49 seconds was for Charmaine Tweet,” Rousey commented as the work was bring done. “Strikeforce had a fight with Sarah D’Alelio and Gina Carano but Gina, she wasn’t medically cleared to fight, so they called me, Sean Shelby called me and they’re like, ‘Oh, can you take the fight? Can you jump in?’ and I’m like, ‘F*** yeah, Strikeforce! I can quit my other job!’ and I remember I was in Rite Aid and I was like, ‘Man, I’m gonna get some f***ing good toothpaste. I’m gonna get a toothbrush.’ I was just, like, getting everything. I went on a Rite Aid splurge! I got 50 dollars worth of sh*t at Rite Aid.”

But it had to wait, because Rousey had already signed a contract with Hard Knocks Fighting Championship to fight “this Charmaine b*tch” as she calls her in the video, then she fought D’Alelio and beat her in 25 seconds.

Other than the constant profanities, it’s pretty interesting to hear Rousey’s view of each one of her MMA wins.

“I have this one term for the kind of woman my mother raised me to not be, and I call it a do nothing b*tch. A DNB,” Rousey once famously said, then made up a bunch of merch with that on it.

She may still have the muscles that were “developed for a purpose other than f***ing millionaires,” as she put it, but what exactly has she done since she left mixed martial arts and professional wrestling? She was on that TV show 9-1-1 for a little bit, but other than that?

Apparently she is still a spokesperson for some companies like Mizuno athletic wear? Who knows?