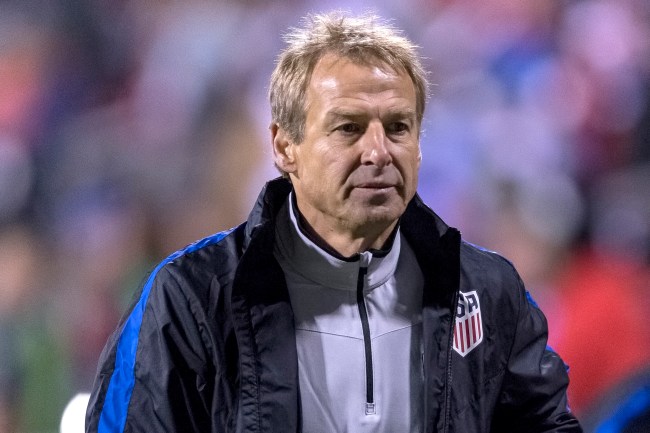 The United States Men’s National Team failing to reach the 2018 World Cup after losing to Trinidad and Tobago (total island population of 1.4 million) was arguably the lowest point for pro soccer in America over the past few decades. Unlike some countries that are just happy to be there, it’s expected that the USMNT will make the World Cup every four years.

He called the current state of the team ‘very sad’ and went on to state that he believes if he was left to coach the USMNT instead of being sacked not only would the team have qualified they would’ve gone on to make the 2018 World Cup final 4 teams in the semifinals.

Obviously, there’s no way to qualify his statement because we have no way of knowing what would’ve happened if he wasn’t fired but he was kicked out just before the rise of Christian ‘Captain America’ Pulisic and things would’ve been A LOT different with an established manager like Klinsmann.

Here’s what he had to say to ESPN

Klinsmann said: “So what happened now the last two or three years is very sad. It’s really sad because the team belonged [in] Russia. They belonged in the World Cup. The qualification was pretty much done and then it happened, the big disaster in Trinidad which no one could ever have imagined.

“As I said, I’d take that team in Russia to the final eight, maybe even the final four because there was a building block there and there was a plan for it and the plan got interrupted and it got even more interrupted when the U.S. didn’t qualify for Russia.

“So hopefully they get it back on track and I keep my fingers crossed for Gregg that he gets all the support he needs to get it on the right track.” (via)

As someone who would love to see the sport of Soccer grow in America I sure as shit hope that Gregg gets things moving in the right direction. If this team fails to qualify for another World Cup with all of the current talent it’ll be a fucking disaster.

Klinsmann went on to discuss Christian Pulisic’s success and how he thinks the move from Germany’s Bundesliga to England’s Premier League has been going for the brightest start on America’s team:

“I think he’s doing very well right now, I think he is growing as a person,” Klinsmann said. “You have to think about the fact that at a very young age he moved to Dortmund. Yes the family was with him, but you are in a different country, with a different language and a different climate.

“He established himself into the senior team at a speed that was mind-blowing and you’re dizzy. He broke into the U.S. men’s national team when I was coaching it and now came the next big move.”

Again, if Gregg Berhalter cannot get this team to qualify for the next World Cup it will a complete and utter disaster. Not only are we geographically gifted with an easy path to qualification compared to Europe or South America but our team has arguably more talent now than they have at any point in over the past few decades.

If you want to catch up on the full ESPN interview, you can click here to read that.