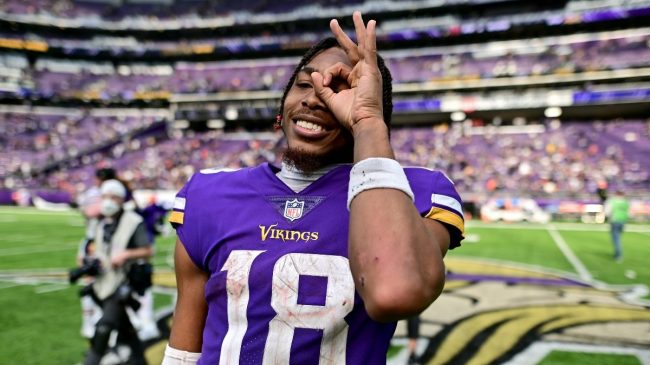 The Minnesota Vikings were able to hold onto the win over the Chicago Bears on Sunday. Even though Chicago nearly came back to win, all eyes are on Justin Jefferson right now. The reason being, the superstar wide receiver broke another franchise record that was previously held by Hall of Famer Randy Moss.

According to NFL on ESPN, Jefferson has officially surpassed Moss “for the most catches in Vikings Franchise history through a player’s first three seasons.” What truly makes this record insane, as that Justin Jefferson achieved this feat in Week 5 of the 2022 season.

Justin Jefferson passes Randy Moss for the most catches in Vikings franchise history through a player's first three seasons 😳 pic.twitter.com/wrivftFORP

We still have 13 weeks remaining, which means Justin Jefferson is going to obliterate Randy Moss’ previous record. This is only good news for the Vikings. Kirk Cousins has a true superstar out wide, as Jefferson has been one of the most dependable receivers in the league since 2020.

Anytime someone can break a record held by Randy Moss, he needs to be congratulated. Especially considering Jefferson is on an absurd pace to begin his career. Minnesota will be in good hands anytime he takes the field.

In addition to breaking the record, the Vikings wide receiver played a large role in helping his team defeat the Bears. Minnesota finds themselves with a 4-1 record through five weeks, which bodes well for their playoff hopes. They’re currently in first place in the NFC North and many can look to Justin Jefferson as to why.

Look for this franchise to continue making noise throughout the season as they aim to win its first division championship since 2017.