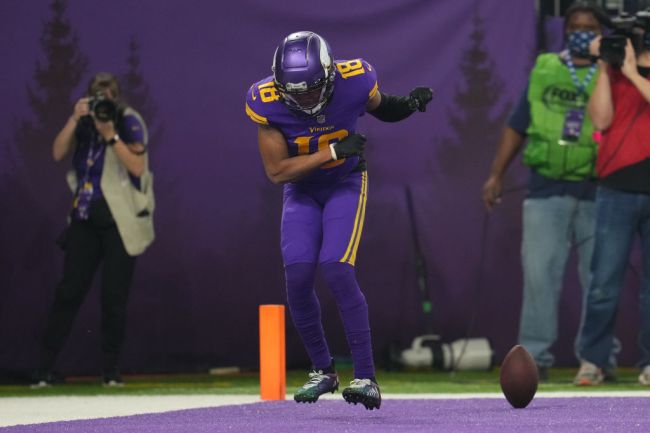 After just 2 seasons with the Minnesota Vikings, Justin Jefferson has already had a pretty impressive NFL career.

As a rookie, Jefferson posted 1400 yards and 7 touchdowns, breaking the rookie receiving record (which has since been broken again by his former LSU teammate, Ja’Marr Chase) and earning him 2nd in the Offensive Rookie of the Year voting and a spot on the All-Pro 2nd team.

He got even better in year 2, racking up 108 catches for 1616 yards and 10 touchdowns, once again securing himself a spot on the All-Pro 2nd team and a second consecutive Pro Bowl appearance.

Now Jefferson has revealed that he has even loftier goals for his future. While speaking with the Twin Cities Pioneer Press’ Chris Tomasson, Jefferson revealed that his new goal is to become the NFL’s first receiver to ever hit 2000 yards in a season.

“That would be big. Just breaking the record my rookie year and then also breaking a record in my third year, that would be crazy for me. That’s going to be a goal for me, for sure.”

According to Jefferson, the Vikings offense is going to be much more pass-heavy during the 2022 season than it has been in the recent past, which should give Jefferson plenty of opportunities to post big numbers.

It’s certainly not impossible for Jefferson to hit that number. Cooper Kupp came close last season with 1947 in the NFL’s first 17-game season.

Coming off of a 1600 yard season and heading into the year in an offense that looks like it will be centered around him, there is every reason to believe that next season will be a special one for Jefferson even if he can’t quite make NFL history.