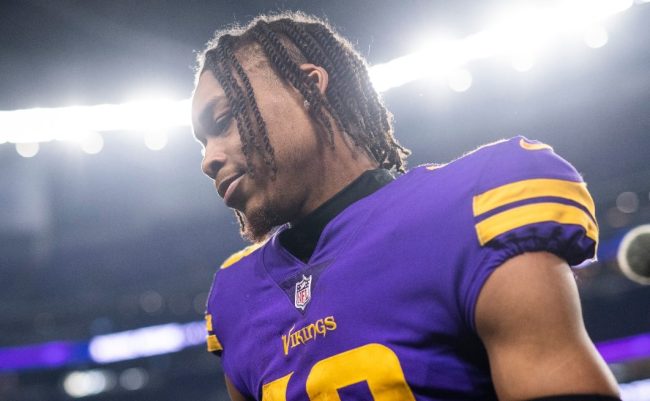 The Minnesota Vikings made some big moves this offseason as they aim to win the NFC North. All eyes are on the offense right now due to Justin Jefferson being one of the best receivers in the game. Additionally, Kevin O’Connell takes over as the head coach and is bringing the LA Rams offensive scheme to Minnesota. For that reason, Jefferson makes an eye-opening statement about Cooper Kupp.

According to The NFL Network, Justin Jefferson is exhilarated to play in O’Connell’s offense. So much so, that he claims he finally understands “why Coop was wide open so many times.” Cooper Kupp went bonkers last season in Sean McVay’s offense and it helped the Rams win the Super Bowl. Now, the Vikings are using that same scheme with Jefferson leading the way.

Considering many view Justin Jefferson as one of, if not, the best wide receiver in football, we should expect a monster year out of the Vikings’ star. He’s proven to be consistent with his opportunities as he’s broken impressive records early in his career. We’ll see how the season plays out, but the Vikings have to feel confident right now.

Minnesota has utilized a run-first approach for the past several years. Largely due to Dalvin Cook lining up in the backfield. Now, the Vikings offense is going through a major change. Kevin O’Connell is implementing the same scheme Sean McVay uses, which bodes well for Justin Jefferson’s success.

The Vikings’ offense has the potential to be one of the best in the league with Justin Jefferson leading the way. Look for them to air it out as they aim to knock the Green Bay Packers off the top of the NFC North.