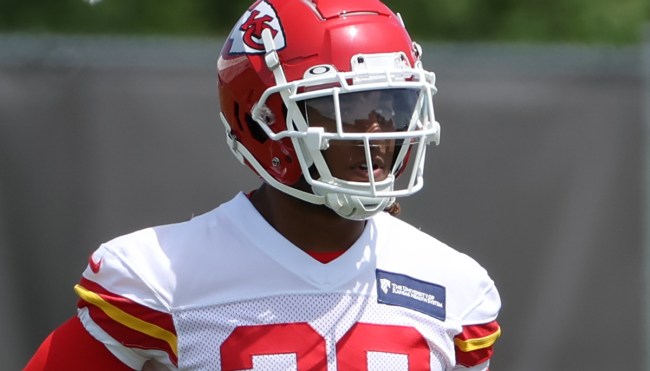 Based on the amount of sheer athleticism you typically have to possess in order to become an NFL player, it shouldn’t come as a huge surprise that guys who specialize in a particular skill or position can still pull off some pretty impressive feats your average person could only dream of achieving.

One of my favorite examples highlighting this reality is a clip from Hard Knocks featuring Vince Wilfork, the wildly imposing 6’2″ defensive tackle who tipped the scales at around 325 pounds during his playing days. When he was a member of the Texans, the big man more than managed to hold his own in a field goal contest against USWNT star Carli Lloyd by splitting the uprights from 25 and 35 yards out.

However, that’s nothing compared to what Chiefs safety Justin Reid pulled off over the weekend.

According to Sports Illustrated, Reid (who also played for Houston before signing with Kansas City earlier this year) decided to stick around on the field for a bit after practice wrapped up at training camp on Sunday to showcase his kicking game.

He did so by teeing up a ball for a 65-yard attempt before absolutely nailing the kick to the delight of his teammates and the other spectators who witnessed the boot (which likely would’ve been good from a few more yards out).

As SI notes, Reid previously got the chance to show off his leg in a preseason game last year after he was tapped to step in for an injured Ka’imi Fairbairn for a kickoff that managed to make it all the way to the end zone.

Get you a man who can do both.