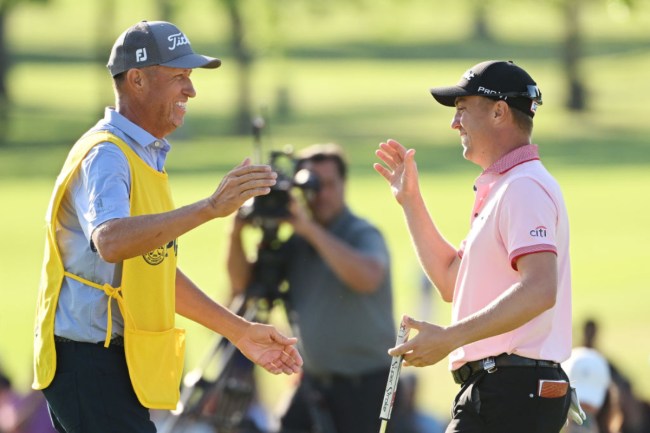 While Justin Thomas was the one who had to hit the shots, caddie Jim ‘Bones’ Mackay deserves plenty of credit for helping JT earn his second career major prior to, and during, the final round of the 2022 PGA Championship.

“I’m fully confident in saying that I wouldn’t be standing here if he (Bones) didn’t give me that, wasn’t necessarily a speech, but a talk, if you will,” Thomas said after his comeback victory on Sunday.

“I just needed to let some steam out. I didn’t need to bring my frustration and anger home with me. I didn’t need to leave the golf course in a negative frame of mind. I just went down, ‘I played pretty well yesterday for shooting 4-over, and I felt like I’d played terrible.’ And he was just like, ‘Dude, you’ve got to stop being so hard on yourself. You’re in contention every single week we’re playing.’ ”

That “talk” from Mackay clearly had a huge impact on Thomas and played a major role in him pulling off what was the third-largest comeback in major championship history.

The win with Thomas was Mackay’s sixth major title as a caddie, but just his first on the bag for JT. His previous five major championships as a caddie came while working for Phil Mickelson. Not only was it a first for JT and ‘Bones’ together, but ‘Bones’ experienced another first after the win.

Thomas gifted Mackay the 18th hole flag after the win, which is a longstanding tradition between major champion and caddie. ‘Bones’ never received a flag from Mickelson during their lengthy and historic career together, however.

Mickelson gave the 18th hole flag from his major championships to his grandfather.

Alan Shipnuck wrote about this in his new book “Phil: The Rip-Roaring (and unauthorized) Biography of Golf’s Most Colorful Superstar.”

“Mackay understood and respected that gesture, but 19 more Tour victories would follow, including four majors and he never got to keep a single flag,” Shipnuck wrote.

“That’s a giant f— you to a caddie,” Shipnuck quotes someone saying who is very close to Mackay, per Golf WRX. “When Phil wins the Masters, he gets the green jacket, the trophy, the big check, all the glory. He had to take the flags, too?… For Phil not to follow the tradition was hugely disrespectful.”

When Mickelson and ‘Bones’ split back in 2017, Lefty sent all the flags to Mackay. In typical Mickelson fashion, he “autographed them in comically large letters.”