The Charles Barkley And Justin Thomas Broadcasting Duo Is Going To Be Electric For The Match: Champions For Charity 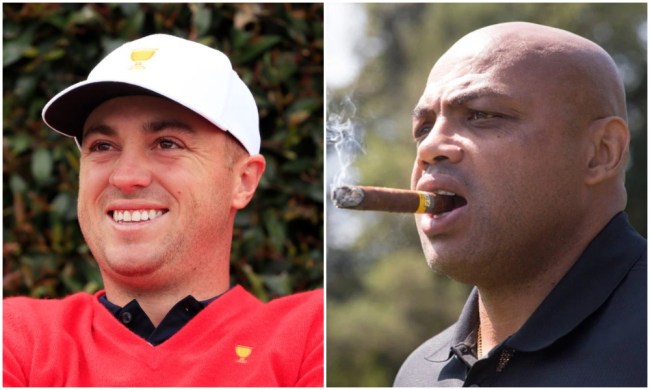 The Match: Champions for charity is shaping up to be must-watch TV. While the setup itself of Tiger Woods teaming up with Peyton Manning to take on Phil Mickelson and Tom Brady is extremely intriguing in its own right, the broadcast team that Turner Sports has put together for the match should make it even that much more entertaining.

While Amanda Balionis, Trevor Immelman, and Brian Anderson are a part of the team as well and are great in their own right, the duo of Charles Barkley and Justin Thomas should bring some serious heat and plenty of laughs when it comes to the commentating side of the event.

Barkley needs no introduction when it comes to his broadcasting and commentating skills. He’s one of the most entertaining in the sports entertainment world. You also have to figure that with the players mic’d up and trash talk flying, Barkley will have an absolute field day in the booth. He’ll have the one-liners ready to roll and the jokes will be flying; he’ll be taking digs at guys from the moment they step on the first tee until the broadcast is over.

Thomas, the No. 4 player in the world, will obviously have great insight into the actual golf side of things, but he’s also not a guy that takes himself too seriously. Like Barkley, he’s got that quick, sarcastic wit and the two should feed off of each other all day long. Thomas is also great friends with Woods so he’ll be giving him a hard time throughout the match.

The real fun will start on the back nine when the two teams will play a modified version of alternate shot. Let’s hope the higher-ups don’t put too short of a leash on Thomas and Barkley and let them do their thing.

The Match will take place on May 24 at The Medalist Golf Club, Wood’s home course, in Hobe Sound, FL. The event will begin at 3:00 PM EST and simulcast across TNT, TBS, truTV and HLN that Sunday with the Bleacher Report app taking care of all pre-match coverage.

Related: We Chatted With Justin Thomas About Being On The Cover Of PGA Tour 2K21, How Tiger Woods Is Going To React And What His Routine Looks Like These Days