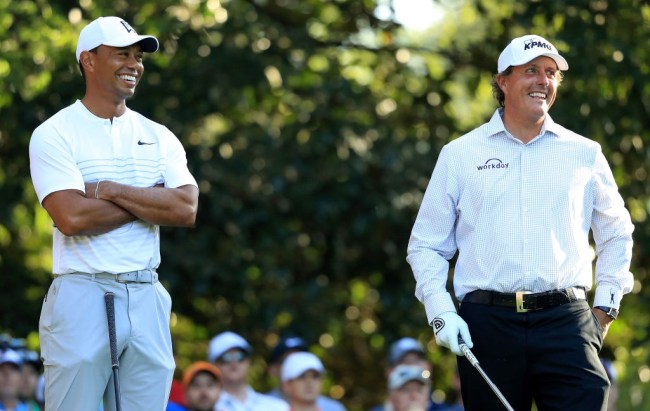 The Match: Champions for Charity between Tiger Woods, Phil Mickelson, Tom Brady and Peyton Manning is set for May 24 at The Medalist, and ever since the official announcement came in April there has been plenty of trash talk going around.

While Woods recently shared that all four guys have been giving each other the needle in a group chat, we got to witness some of the trash talk first hand on Thursday when all four of them joined Ernie Johnson for a virtual interview.

Mickelson came with some serious heat right out of the gates pointing out a picture of Woods putting the green jacket on him at Augusta back in 2006 with his very full trophy case in the background as well. Mickelson then showed off the trophy from The Match back in 2018 that he won in a playoff, which was a nice little jab, but Woods cam prepared as well.

The 2019 Masters champ jumped out of frame for a split-second saying he was a little bit chilly after an ice bath, which let’s be honest he probably did just take one, and threw the green jacket over himself like a blanket.

Phil came out talking trash, but Tiger had the green jacket ready 😂

It's @TigerWoods & Peyton vs. @PhilMickelson & @TomBrady 🐐 Capital One's The Match is on May 24 at Tiger's course, The Medalist, only on TNT. Full interview in the B/R app https://t.co/99p5H7EB4W pic.twitter.com/5BJkMzl9dT

Tiger and Phil have had their fair share of battles over the years and have traded jabs for quite some time now, this isn’t anything new for them. I think you have to tip your cap to Woods in this exchange, however.

Here’s to hoping we see some more trash talk during the actual event later this month.