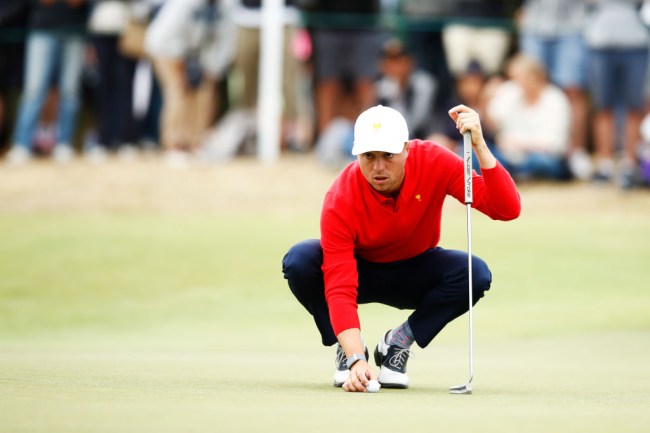 During Justin Thomas and Rickie Fowler’s four-ball match against Marc Leishman and Haotong Li at last week’s Presidents Cup, something happened that got some folks pretty riled up.

It all went down on the 11th hole when Leishman asked Thomas to mark his ball before Fowler hit his chip onto the green. Thomas’ ball could’ve played as a backstop for Fowler’s approach, so the request was totally warranted from Leishman.

The real drama happened on the green. Fowler went on to make his par putt while Thomas was left with around a 3-foot putt for birdie, which he sunk and then laid down his putter measuring the length of the putt indicating he thought the putt should have been conceded.

When your buddy doesn't give you the gimme putt 😆#PresidentsCup pic.twitter.com/qod9ZJHJdB

One of the many great things about match play is that your opponent can or can not concede putts whenever they choose to. If the Internationals wanted Thomas to putt out a putt literally hanging on the lip of the cup they 100% could.

As you can imagine, Thomas was on the receiving end of some pretty choice words from fans online.

He went on to apologize on Twitter about the move he pulled off saying on Twitter ‘Just having fun with my partner was all I was doing. Totally understand it didn’t come off as a good look I’m sorry for that. But Rick and I like to have fun and I show some emotion to pump us up.’

The thing is, though, Thomas didn’t need to offer up the apology. With the wording he used you could argue that it’s sort of a half-assed apology, but nevertheless, he didn’t really need to say anything to the fans criticizing him showing a bit of emotion on the course.

This is a classic example of golf purists that don’t like much fun on one end of the spectrum and others (me) not seeing anything wrong with what he did.

That putt was gimme length, there’s no doubt about it, especially for a putter of Thomas’ level and Thomas simply wanted the Internationals, along with fans watching, that he thought so too. At the end of the day, him laying down his putter was completely harmless and wasn’t disrespectful to anyone.

For the golf boomers out there, sure, he could’ve simply moved on from the hole and maybe said some choice words about the situation to himself, but that’s not the kind of player Thomas is. He’s a fiery guy and when you put him in pressure-filled team events like the Presidents Cup where emotions run high, especially on International soil, things like this are going to happen.

If you think this is worse than Patrick Reed shushing crowds or players pumping up crowds after the opposition misses a big swing putt, you need to rethink the situation.

Thomas thought the putt was a gimme and laid down his putter just like most people would do in that situation during a meaningless match on their home course; he didn’t need to explain himself.