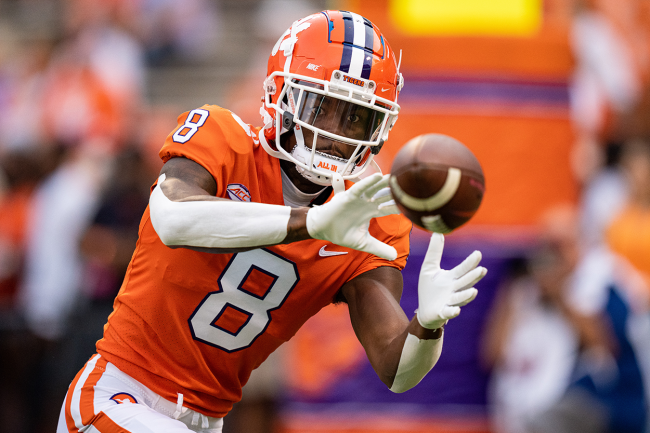 Clemson wide receiver Justyn Ross went undrafted in 2021, but has found a home with the Kansas City Chiefs. The first look at the rookie pass-catcher during training camp is limited, but very promising.

Ross, who burst onto the scene as a freshman at Clemson, pulled in 46 of Trevor Lawrence’s passes for 1,000 yards and nine touchdowns. During the national championship game, he had six catches for 153 yards and a touchdown against Alabama.

Watch some of the catches against Bama😳😳 pic.twitter.com/lQ506Fjf4I

In 2019, as a sophomore, Ross caught 66 balls for 865 yards and eight touchdowns. He was a crucial part of the Tigers’ offense for a second year in a row and dazzled with his ridiculous athleticism.

Justyn Ross you had my curiosity.

You now have my attention. pic.twitter.com/PbtzD2Jt88

However, after making a mark on college football in his first two years, Ross’ health became a concern. He missed the entire 2020 season due to a congenital fusion condition of his neck and spine that required surgery.

Fortunately, Ross was able to make a full recovery and caught 47 passes in 2021 before forgoing his final year of eligibility and declaring for the NFL Draft. During his final year on the collegiate level, the 22-year-old suffered a stress fracture in his foot and didn’t move particularly well during his Pro Day.

Tahj Boyd to Justyn Ross for the 1st down at Clemson Pro Day. #AllIn pic.twitter.com/uNOAOs9Z5z

Because of the injury concerns, Ross did not hear his name called in the NFL Draft and joined the Chiefs as an undrafted free agent. Should he be able to stay healthy, he has a legitimate shot to not just make the roster, but to be a top option for quarterback Patrick Mahomes.

Based on the first look at Ross in Kansas City, it looks like he is well on his way.

He was cutting off of his injured foot and moving fluidly in the open field.

From rookie minicamp day 1: Our first look at Justyn Ross in a #Chiefs uniform pic.twitter.com/Qp4BJoafJk

Both the Chiefs and Ross are hopeful and believe that his struggles with injury are in the past. If that is true, he could be the biggest steal of the draft.