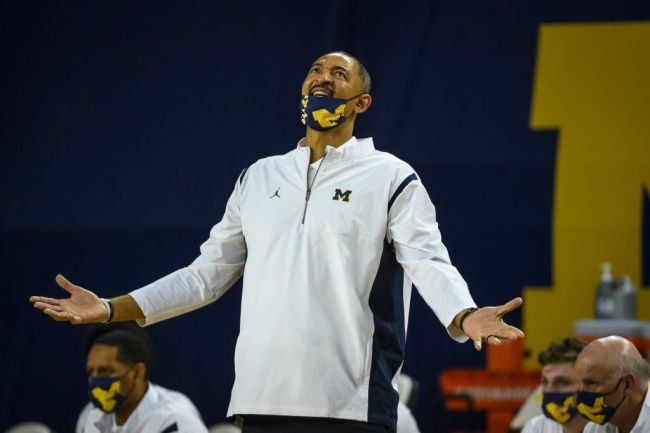 Michigan basketball has not played a game since January 22 and Juwan Howard is desperate to get his boys back in the gym. The No. 3-ranked Wolverines had their fifth-straight game postponed on Thursday as part of their return-to-play planning following the program’s pause due to COVID-19. They were scheduled for a top-ten matchup with Illinois, but both schools and the Big Ten Conference agreed earlier in the week not to play the game.

The team’s third-year head coach said on Friday that he will do anything to get back to competition, including playing Michigan’s game against Wisconsin outside on Sunday.

Juwan Howard said he couldn't comment on the Illinois game being postponed and that it wasn't his decision.

He does sound pretty ready to play a game, though, suggesting he would play Wisconsin outside if needed. pic.twitter.com/TyXIkLqIz8

On the heels of an impressive win over Purdue at the end of January, Michigan Athletics followed a Michigan Department of Health and Human Services recommendation to pause all athletic activities in all sports. That stoppage came on the heels of a dominant string of wins against Purdue, Maryland, No. 9 Wisconsin, No. 16 Minnesota, and No. 19 Northwestern. The Wolverines won each of the six games by no less than 17 points. There was a road loss to Minnesota mixed in, marking the only defeat in Michigan’s 14 games this season, but the Wolverines turned around and stomped the Gophers at home the next week.

At 13-1 overall and 8-1 in conference play, Howard’s team is legit. Mike Smith is shooting 47 percent on the year and Isaiah Livers is not far behind with 44 percent shooting. Around the two star scorers, Franz Wagner and Hunter Dickinson are dominating in their own right. There wasn’t a hotter team in the country prior to their pause, and the Wolverines are projected as a one seed by ESPN’s Joe Lunardi.

We’ve seen how significantly teams can struggle coming off of a COVID-19 pause, so there is no telling how this team will look when they get on the court for its next game. Whenever it happens, Howard knows that there might be a buffer period to get his guys up to speed before March Madness and is eager to play. With just over a month before the Big Dance, let’s find them a playground, shovel the snow and get back to basketball.