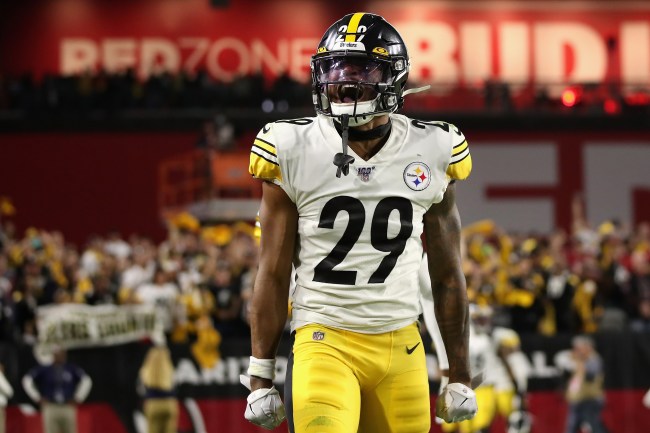 Kameron Kelly, a second-year defensive back for the Pittsburgh Steelers, went a little bit crazy the other night at a bar in Pittsburgh, resulting in an arrest for what’s being described by police as “making terroristic threats and resisting arrest.” And the reason? Because the song he chose on the jukebox was skipped over — seriously.

According to ESPN, via court paperwork, Kameron Kelly was “being disorderly at Mario’s South Side Saloon,” which led to an officer approaching the NFL player to ask him to leave. Rather than listen to law enforcement, Kameron Kelly took things next level, with witnesses saying he had threatened to knock out an employee at the bar after his music choice was skipped on the jukebox. It didn’t stop there for the defensive back, though, as he continued to argue outside the bar, getting in the face of the cop after the officer accidentally stepped on the foot of the woman with Kelly, who the player referred to as “his girl.”

You can check out more details of the incident below, per ESPN’s report.

Kelly said the woman was “his girl” and pushed his chest against the officer’s and threatened him, according to the complaint.

Kelly then resisted arrest, arguing with officers, and an officer punched Kelly in the face multiple times during the struggle, according to the complaint. Kelly was treated at a Pittsburgh hospital for a split lip and was then taken to the Allegheny County Jail.

Yikes. Looks like Kameron Kelly’s on Santa’s naughty list after the blow up he had at the bar.

Primarily a special teams player, the Steelers have yet to make a statement on the incident. But, given the severity of Kelly’s threats and his involvement in a tussle with officers, it’d be pretty surprising if he plays a crucial part of the team’s playoff push in these last couple games — assuming the team doesn’t outright cut him after this.