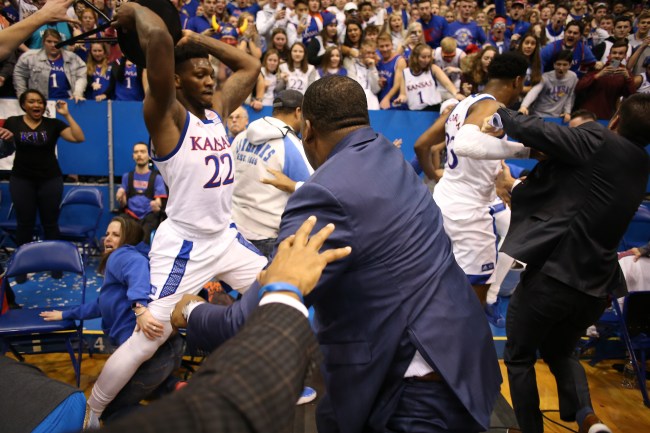 If you are just tuning in to the world of College Basketball this morning you might have missed the news of a crazy, violent, and unprecedented benches-clearing brawl after the Kansas State (8-10) vs. #3 Kansas (15-3) game on Tuesday night. This Kansas-Kansas State Brawl is pretty much the biggest news story of the week which is bizarre because it seems like in years past this would be the biggest story of the decade but news happens so quickly these days I can’t help but think we’ll forget about this by March.

Up close footage of the action spread like wildfire on Twitter. Cheerleaders and coaches were caught up in the kerfuffle. Tears were shed. People were screaming. Bodies were hitting the floor. One player even picked up a damn chair in an apparent attempt to wield it as a weapon.

It wasn’t quite on the scale of the infamous ‘Malice at the Palace’ but you can watch this action and see how violent and dangerous the action was for everyone up close. This Twitter clip from @Riley_Gates is the most widely shared footage from the brawl:

And here’s a longer version from ESPN which shows multiples angles of the fight:

After the game, Kansas Jayhawks head coach Bill Self gave his customary press conference where he ripped his team to shreds for their role in the post-game brawl. He stops short of naming names and going complete scorched earth on his players but I think he says everything that needs to be said in the moment, and I’m sure he’ll be answering questions about this brawl for years to come.

Here’s what Bill Self had to say after the game:

“Obviously, it’s an embarrassment. It’s not something that you’d be proud of. What happened is absolutely zero signs of toughness. It’s a sign of immaturity and selfishness more so than it is toughness. So if I was a fan watching, obviously, depending on what your perspective is, there would be nothing about that that would intrigue me to want to watch more.

“At least from what happened tonight, I don’t see anything positive. We’ve seen things like this happen [at] other places, and certainly it gets some attention. And you it’s the exception and not the rule, but still, it’s inexcusable. These things can’t happen. This doesn’t have anything to do with competition. Those were selfish motives on why it took place at the end.”

When asked about De Sousa wielding a chair as a weapon he added this:

“Regardless of what happened, it’s a terrible image and there certainly will be consequences for that.”

But his comments about ‘at least…’ have me scratching my head and think that this portion, if any, is what he’ll regret saying about the incident:

“It happened in handicapped seating. So at least if you’re going to do something, at least take it on the court or whatever. It’s ridiculous that they would go into the stands.”
….
“That was an embarrassment on our part for the role that we played in it, and there will be consequences that I’m sure I’ll announce [Wednesday] for that role as soon as I’m able to study it and come to grips with all of it.”

If you’re not a big reader and would rather watch the video clip from the post-game conference you can find that footage right here:

During the brawl, Kansas’ Silvio De Sousa is the player who picked up a damn chair and seemingly wielded it like a weapon as if this was some WWE Royal Rumble action. I’m sure the penalties and suspensions from the NCAA will be swift and severe but I suspect his suspension to be harsher than the rest:

De Sousa with a chair and three more Jayhawks attacking one Wildcat. pic.twitter.com/R13opR5HM7

Kansas’ Silvio De Sousa went full WWE and picked up a chair amid a huge brawl between Kansas and Kansas State. pic.twitter.com/flC5NDPRfd

we almost had a chairshot pic.twitter.com/nY7fviM9zf

I’m sure that Kansas and Kansas State will be proactive in handing out suspensions and punishments to their players before the NCAA gets involved but the NCAA is 100% going to get involved in this so it will be interesting to see how their punishments align with the conference games, tournaments, and March Madness which isn’t all that far in the future.