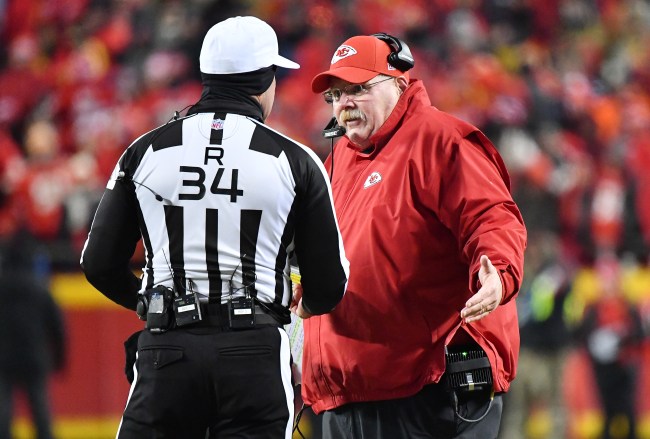 The Kansas City Chiefs were on the wrong side of the AFC Championship Game because of a F’in coin toss going in the favor of the New England Patriots at the start of overtime, and Kansas City’s trying to make sure they, along with no other team, has to suffer through something like that again. The Patriots scored on their only possession, leaving the Chiefs’ potent offense on the sideline without ever touching the ball in the extra period.

According to Pro Football Talk, Kansas City Chiefs General Manager Brett Veach said on PFT Live that his team’s head coach, Andy Reid, is working on a proposal for the NFL that would change the overtime rules, making sure both teams get at least one offensive possession. As the rule stands now, if a team wins the coin toss and scores a touchdown on the first possession, the game ends. If they score a field goal, the opposing team gets a chance to either tie with a field goal of its own, or win with a touchdown. If the game remains tied after both teams possess the ball, it becomes sudden death. Basically, the rule is a pile of crap.

Here’s what Veach had to say about the hopeful proposal, per Pro Football Talk.

“Coach is working on that,” Veach said. “I think everybody wants a chance for guys to do what they do. I don’t really see the downside of having that. Especially when you have a player like Pat Mahomes. It would have been a lot of fun. I think people, if they weren’t already tuned in for a great game, would have turned on that overtime.”

The Kansas City Chiefs weren’t the only team that lost in a conference title game in overtime, though, as the L.A. Rams defeated the New Orleans Saints in OT, too, meaning this idea of Reid’s might have some support. In order for any proposal to pass, 23 other teams will have to agree with the idea, so we’ll have to wait and see how this all goes down.

Here’s what Reid added about the overtime idea, per WEEI:

“They’re talking about them and we’ll see how all that rolls,” he said. “We all have our opinions. We’ll just see how it goes. The league makes the right decision. They’ve got to listen to a lot of voices coming at them from various angles. But they’re aware of it and looking at things.”

Any overtime rule that would make it more fair seems like a good idea; even if the NFL wants to eliminate snaps to help protect players from added injury. That’s understood, but should it really be at the mercy of another team? Kansas City Chiefs tight end Travis Kelce doesn’t think so, as he talked about the unfair overtime rules following his team’s loss in the AFC Championship Game.

I’m definitely in favor of (both sides getting the ball). Especially being in a situation like that. I would probably be a little more, I don’t want to say careless, but like, ‘Yeah, they could change it if they want, but it doesn’t really affect me.’ Being in that situation, really having no control, no rebuttal or no retaliation on playing against an amazing offense like that — it kinda sucked.

And here’s the video of the entire conversation with Kelce below, which was from an interview with 98.5 The Sports Hub’s “Felger & Mazz” radio show.

It’s clear the Kansas City Chiefs think they kind of got screwed against the Patriots because of the current NFL overtime rules. With an electrifying offense with league MVP Pat Mahomes at the helm, it’s safe to say every football fan would’ve wanted to see he and Tom Brady battle it out for as long as possible — so let’s hope other NFL teams are onboard with the proposed change so each team at least gets possession.