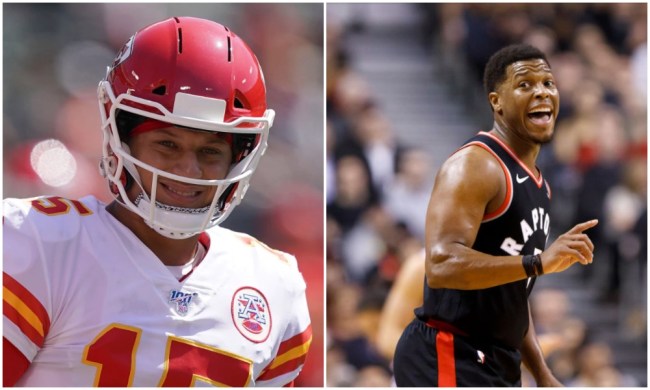 Patrick Mahomes recently signed a new contract with the Chiefs worth up to $503 million, he’s the defending Super Bowl MVP, and he’s got a baby girl on the way with his fiancee, but his life in Kanas City is missing something, and that something is an NBA team.

It may not be missing for long, however, as Mahomes, Kansas City Mayor Quinton D. Lucas, and other state representatives are advocating for the Raptors to play their home games at T-Mobile Center in Kansas City for the 2020-21 season. The Canada-United States border is closed indefinitely due to the pandemic which creates quite the hurdle for the Raptors and other teams around the league to travel to and from Toronto.

While other cities will surely be in-play to host the Raptors, and likely many closer to Toronto than Kansas City, it’s worth noting that T-Mobile Center is certainly well-equipped to host an NBA team’s home games. The arena that seats just under 19,000 has hosted the Big 12 men’s conference tournament since 2010. While it’s a longshot that we’ll see full arenas during the first half of 2021, the arena would at least present the possibility of doing so.

Louisville has also been mentioned as a possible home base for the Raptors next season.