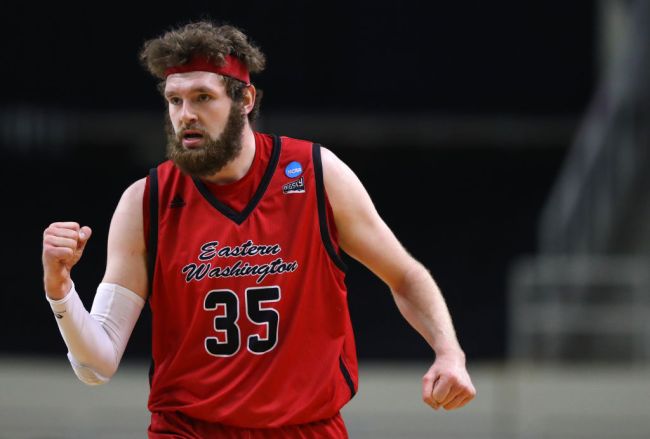 Good team win, great teams cover, and Eastern Washington is a great team. The 14-seed Eagles played their way into the NCAA Tournament by dominating the Big Sky Conference and nearly kept that momentum rolling into the First Round. Led by brothers Jacob and Tanner Groves, head coach Shantay Legans’ team came out of the gates fired up. The bench was going wild and the players were amped. It looked like the stars were aligned.

EWU played to a 46-38 lead over 3-seed Kansas at halftime and the Groves brothers accounted for 32 of the points scored. The Spokane-natives were born two years apart and sit one class standing apart (Jacob is a junior and Tanner a senior), but they both stand at least 6-foot-7 and accounted for a very nice 69% of the Eagles’ final scoring total. They looked amazing doing it.

Both of their final stat-lines were outrageous.

The performances garnered a lot of much-deserved respect.

An incredible performance for Tanner Groves. 35 points and almost pulled off a monster upset. He deserves a roaring standing ovation. pic.twitter.com/9JMr7O4Dt6

Unfortunately, the Cinderella storyline did not continue and their insane amount of production couldn’t hold off the higher seed.

Though the Jayhawks went down as many as 10 in the second half, Marcus Garrett and Ochai Agbaji led them back. Kansas took the lead with just under 10 minutes and went on to advance to the Second Round. However, despite the roaring comeback, Bill Self’s bunch failed to cover, and the way it went down was heart-breaking for bettors who took the Big-12 team with the points. Favored by 10.5, the eventual victors went up by 11 after a pair of free-throws. With 15.9 seconds remaining, Eastern Washington brought the ball up and scored on a floater with 6.3 seconds left. Kansas dribbled out the clock.

Eastern Washington backdoor covers +10.5 on this floater with 6.3 seconds. pic.twitter.com/1iNYcA4Ytg

With the make in the final 10 seconds, the Eagles earned a well-deserved cover and left bettors with a brutal beat.