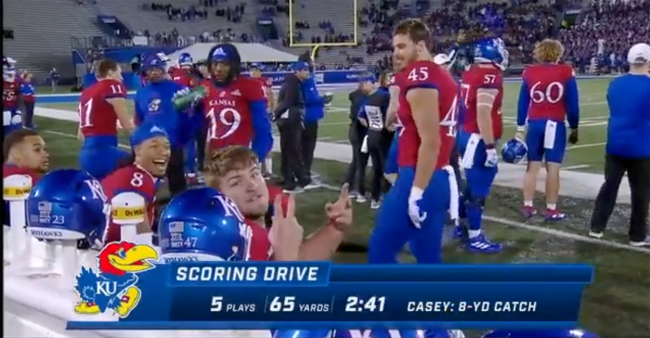 Jared Casey is living the dream. Kansas’ walk-on tight end and fullback has quickly become a folk hero both in-state and nationally.

On Nov. 13, Casey was on the receiving end of a two-point conversion to beat Texas on the road. Prior to that game, he had never taken a live, in-game snap for the Jayhawks.

Since then, Casey has ascended to national recognition and cashed in on his overnight fame. Shortly after beating the Longhorns, the true freshman signed a deal for his Name, Image and Likeness with Applebee’s.

As a part of the deal, Casey filmed a commercial that promoted the restaurant’s 2-for-20 deal. “You always gotta go for two,” he says in the ad. Get it?

In return for the ad spot, Casey received $800 cash and $1,000 in gift cards to the restaurant. For a player who is not on scholarship, that is rather lucrative and can afford him 90 2-for-20 meals, should he so choose.

It appears as though Casey’s commercial appearance has made him forever grateful to Applebee’s. During Saturday’s game against West Virginia, the 6-foot-0, 254-pound Kansas-native hauled in a touchdown to bring the game within a point.

definitely not a one hit wonder pic.twitter.com/7l0jGMKnh7

After returning to the sideline, the Fox Sports cameras cut to him for a reaction. He did not out his family, or yell the typical “let’s gooooo” or something like that.

Instead, Casey decided to plug Applebee’s.

When the camera turned in his direction, Casey mouthed “Applebee’s 2 for $20” right into the lens for the whole world to see. It was hilarious and his teammates were cracking up.

Casey has now recorded touchdowns in back-to-back weeks and has quickly earned himself a relatively prominent role in the Jayhawks’ offense, with eight catches in two games. Although Kansas did not win either game, both losses were within one possession.

It’s pretty safe to assume that Casey closed out the evening with a 2-for-20 meal, right?