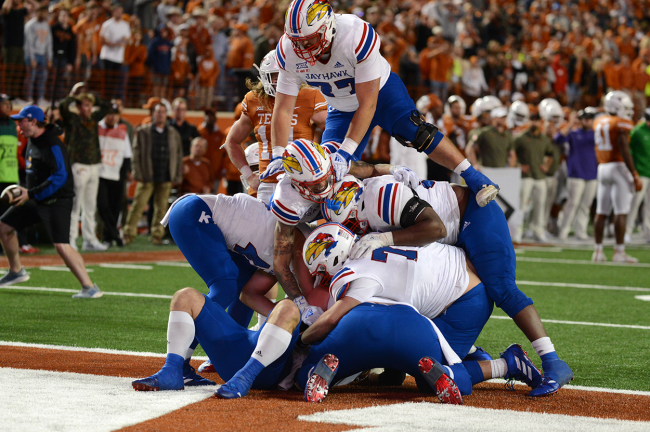 Prior to last weekend’s game against Texas, Kansas walk-on fullback/tight end Jared Casey had never taken a live-game snap for the Jayhawks. Now, less than a week later, he’s cashing in on his game-winning two-point conversion.

During Saturday’s game, Kansas took an early lead on Texas at Texas. The Jayhawks allowed the Longhorns back in it and the game went to overtime.

After Texas scored and kicked a field goal, Kansas answered with a touchdown of its own. Instead of tying things up and sending it to double overtime, head coach Lance Leipold decided to go for two and Casey was on the receiving end of the game-winner.

That is the premise of Casey’s new Applebee’s commercial.

“You always gotta go for two,” he says with a wink.

Back in July, the NCAA finally allowed players to profit from their Name, Image and Likeness. Essentially, the ruling allows student-athletes (an antiquated term) to make money from appearances, commercials, sponsorships and by selling merchandise.

Casey, who is forever a legend in the state of Kansas, agreed to a deal with Applebee’s for the commercial. It will air primarily in the local region.

While that number may not seem particularly lucrative, that’s a big number for a college student, and especially for a walk-on, who is not having any help with his tuition. And, of course, he’s on TV.

Casey also says that it might not be his last endorsement deal.

According to the Kansas City Star, Casey said he was working on a deal with Lewis Automotive Group. The dealership has locations in Hays, Topeka and all across Kansas.

He says that his current Kia Spectra has roughly 230,000 miles on it, so he would not turn down a deal that might involve a new whip. His parents also have a Kia with 264,000 miles on it that they drove about 11 hours to watch their son win the game in Austin on Saturday.

Thank goodness that the NCAA waited so long to allow NIL, they were really doing everybody a favor by allowing incredible opportunities like this. *eye roll*