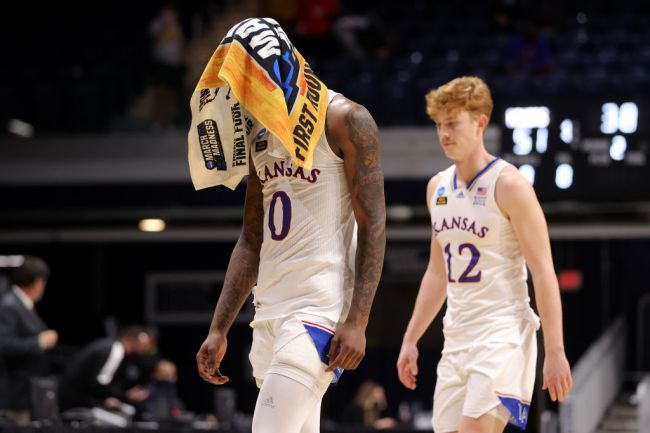 USC on to the Sweet Sixteen after dominating Kansas from start to finish. The Jayhawks went down by 19 at halftime and ended up losing 85-51. It was the school’s largest margin of defeat since the 1940 National Championship, when it lost to Indiana by 18, and the loss sets a historic mark for NCAA basketball blue bloods. Kansas, Duke, North Carolina and Kentucky will all miss out on the Sweet Sixteen for the first time since 1979.

This marks the first time since 1979 that Duke, Kansas, Kentucky and UNC all failed to make the Sweet Sixteen.

On the other side of the ball, Andy Enfield’s Trojans could not miss and will make the program’s first Sweet 16 appearance since 2007. In that year, Nick Young (Swaggy P) and Taj Gibson’s USC knocked off Kevin Durant and Texas in the Round of 32, and they faced Tyler Hansbrough, Ty Lawson and North Carolina for a spot in the Final Four. It is also Enfield’s return to the Sweet 16, after he was head coach for the legendary Florida Gulf Coast cinderella run in 2013.

Andy Enfield is going back to the Sweet 16 for the first time since Dunk City pic.twitter.com/uP5rV7RkcF

The Trojans are led by dynamic brothers Isaiah and Evan Mobley, who combined for 27 points and 21 rebounds. Five players scored in the double digits and a whopping 57.1 percent from the field was hard to overcome for their opponents, who shot less than 30 percent. They were on fire.

USC will face Oregon for a chance at the Elite Eight, marking the second time this year that the teams have played. The cardinal and gold won the first round and will hope to see their shots continue to fall when they meet again. As the Pac-12 continues to shine throughout the 2021 Tournament, the Big-10 and the Big-12 continue to struggle. The former has only 1-seed Michigan remaining in the bracket and the latter only has No. 1 overall seed Baylor. Meanwhile, the Pacific Coast Conference has four of its five participants advancing. The SEC and ACC have two.

The Big-10 in March Madness:

The Pac-12 in March Madness: