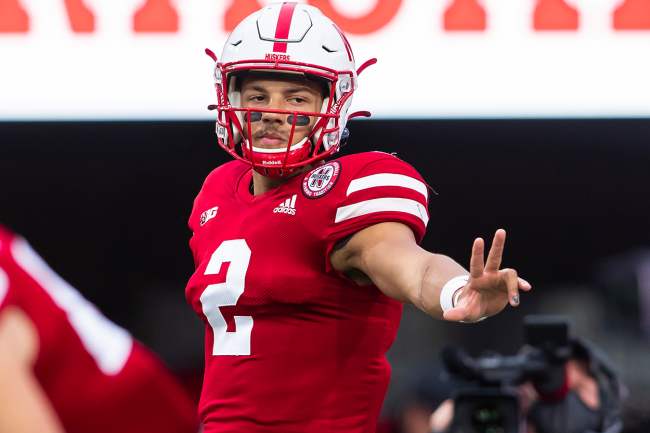 Adrian Martinez signed with Nebraska as a four-star quarterback in the Class of 2018 and spent the first four years of his career with the Cornhuskers. Head coach Scott Frost took over in Lincoln ahead of the 2018 season and named Martinez the starter as a freshman.

Over the course of the last four seasons, Martinez, Frost and Nebraska went 15-29. The Fresno, California-native showed a rare flash of greatness, but mostly struggled mightily. Part of the issue was his decision-making, part of the issue was the inability to make plays.

In addition, Martinez appears to be alluding that part of the issue may have been the lack of talent around him.

During the offseason, after being granted an additional year of eligibility because of the COVID-shortened 2020 season, Martinez entered the transfer portal as a graduate transfer with one year left. In the end, he chose to enroll at Kansas State, which is coming off of an 8-5 season and a bowl win over LSU.

Head coach Chris Klieman is entering his fourth year with the program after coming over from North Dakota State is hoping that Martinez is the additional spark that could take the Wildcats to the next level. Martinez seems to have similar hopes.

The 22-year-old recently spoke with the KC Sports Network and had some rather feisty comments about his current and former programs. Martinez said that Kansas State is the “most talented” team that he’s ever played on.

"Probably the most talented squad I've been able to be a part of."

That, of course, speaks wonders about the hope and hype in The Little Apple. That also speaks loudly about the lack of talent at Nebraska over the last four years. Martinez, whether intentional or not, is throwing direct shade at the Cornhuskers.

Unfortunately, the two schools will not play this fall. There will not be an Adrian Martinez revenge game.