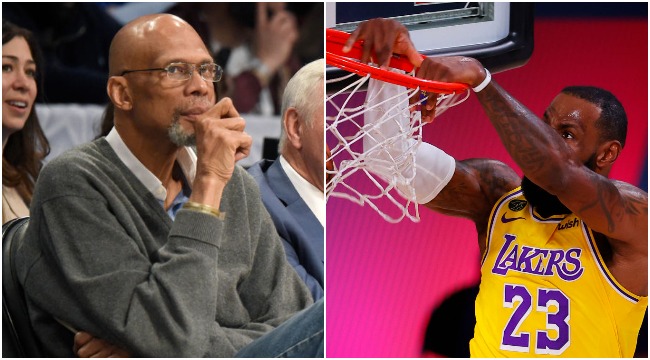 Over 30 years since Kareem Abdul-Jabbar hung up his kicks, the six-time MVP’s career points record remains—a feat made more preposterous by the fact that Kareem only made 1 (ONE) three-pointer in his entire 20-year career with the Bucks and Lakers.

For perspective, LeBron, who sits in the number 3 spot behind Karl Malone and 3,020 points behind Kareem, has connected on 1,979 triples over 17 seasons.

James, who is bionically constructed to play forever, will likely dethrone Kareem if he plays another three full seasons and Lew is totally fine with that.

Speaking with NBA correspondent Marc Stein, the 74-year-old surprisingly claimed he was “excited” to witness LeBron break his scoring record, adding it would be a “source of hope and inspiration” to future generations.

LeBron James is right around 3,000 points behind you for the NBA’s all-time scoring lead. If he can put a couple more injury-free seasons together, he has a real opportunity to pass you. How would you feel about that?

Kareem: I’m excited to see it happen. I don’t see records as personal accomplishments, but more as human achievements. If one person can do something that’s never been done, that means we all have a shot at doing it. It’s a source of hope and inspiration. Roger Bannister broke the four-minute mile back in 1954. Since then, not only have 1,400 runners beaten that time, but the new record is 17 seconds less. We all win when a record is broken and if LeBron breaks mine, I will be right there to cheer him on.

For perspective on how cherished records can turn people spiteful, let’s head over to the NFL.

“This is on my head all the time,” Gastineau said. “It goes through my head all the time. I want to clear things up. It’s a good record and it took me a long time to get that,” Gastineau said. “It took a lot of work, a lot of work to get that record. So many years I worked my butt off to get it, and I finally got it, and it shouldn’t have been cheapened like it was. It’s like a tarnished record.”

We’ll see if Kareem is still singing the same song in a few years when newly-minted Laker Bronny James is carrying his dad to the rim so he can score his final record-setting point.