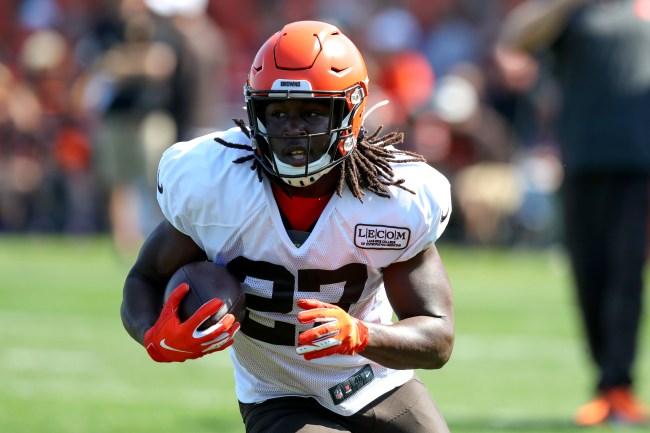 The Cleveland Browns are returning from their bye week this week and they had a new addition to the team on the practice field on Monday: suspended running back Kareem Hunt.

Hunt, who will become eligible to play in an NFL game during Week 10, is currently serving an 8-game suspension for a domestic violence incident.

The 2017 NFL rushing champion is also recovering from an August sports hernia surgery, but is expected to be fully healthy when he becomes eligible to play against the Bills on November 10.

#Browns have been informed by the NFL that RB Kareem Hunt is permitted to practice & was on the field this morning. Baker welcomed him back with a big hug. Hunt pic.twitter.com/gwVQObDTnC

On Monday, Browns head coach Freddie Kitchens was asked how Hunt looked on the practice field.

“Very pleased and I thought he looked good. Looks like he was in great shape, moved around good,” Kitchens told the media.

Freddie on Kareem Hunt’s return: “It’s good to have him back in the locker room.” #Browns #3Browns @wkyc pic.twitter.com/K2H0Y0mwSf

Hunt joins a Browns team that already has running back Nick Chubb sitting at fourth in the league in rushing (based on yards per game – 101.7) and averaging 5.3 yards per carry, so it remains to be seen how, and how much, he will be used in the team’s offense.

Reactions to the news of Hunt’s return has understandably been mixed, but there certainly has been no shortage of hot takes from myopic Cleveland Browns fans.

Hunt is a better RB than Chubb in every way. Hunt will take over the starting spot right away and be the work horse. Sell Chubb high, now.

Let’s go brown fans. Even though Kareem Hunt has been a di*k he’s still apart of this team

KAREEM HUNT, NICK CHUBB, AND JARVIS LANDRY WILL ALL BE ON THE FIELD AT ONCE AGAINST PATS?! W.

Browns to Nick Chubb after Kareem Hunt comes back pic.twitter.com/NJiqUwikkW

Some Browns fans will never learn.